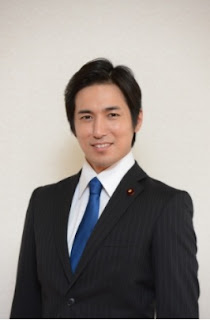 Takahashi Mitsuomi will be playing Kimura Tae's late husband in the upcoming NTV Autumn 2017 drama "Black Revenge" which will begin its run from 5 October in the Thursdays 11.59pm timeslot. Kimura will be playing a capable report writer Saori who works for a weekly magazine on a contract basis. Her husband Terada Keigo is driven to commit suicide due to a baseless scandal so Saori tries to find the culprits who are responsible for this and take revenge for her late husband. While investigating the truth behind her husband's death, Saori also has to come to terms with the secrets Keigo had been hiding from her. Co-stars include Sato Jiro, Horii Arata, Okano Maya, Nakamura Eriko and Suzuki Sawa.

Takahashi commented that in this era where the political world is filled with news about in-fighting among politicians, money, extramarital affairs, his character Keigo had tried his best to stay out of trouble but still got framed for something he didn't do, betrayed by people he trusted and pushed into hell. While breathing his last, he entrusted his wish to seek vengeance and vindication with his wife so Takahashi hoped to show the twisted love between them in this whirlpool of strong hatred. As for working with Kimura, he praised her as a very charming and beautiful actress who he could speak to easily so it has been very enjoyable to work with her. Although the content of this drama is heavy and somewhat painful to watch at times, he hopes to be able to enjoy each scene to the fullest.