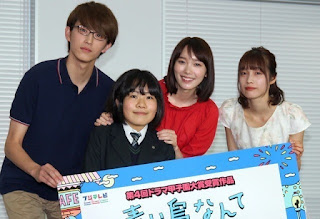 The completion press conference of new FujiTV drama SP "Aoi tori nante" was held at Diver City Tokyo on 5 October which was attended by the scriptwriter Kuribayashi Yuko and cast members Iitoyo Marie, Sugino Yosuke and Nakamura Yurika. The drama SP will be shown at 11pm on 22 October via FujiTV TWO.


The story is based on the winning script by 17-year-old Kuribayashi who won the 4th Dorama Koushien competition which is held to discover promising scriptwriters who are currently senior high school students. Iitoyo plays a senior high school student Asadera Karea who is troubled over her feelings for her boyfriend set during the last day of her summer holidays when she finds out that he is two-timing her. By a strange stroke of fate, Karea happens to meet Sekiya Kouichi (Sugino Yousuke), the scholar of their school, when they send a blue bird to the vet. Nakamura Yurika will play Yoshii Nazuna who is in love with Sekiya while Makita Sports will play a street musician who is a key person in this story.

Kuribayashi who also made her directorial debut through this drama, revealed that as the filming progressed, she came to realise how naive and weak she was but she also enjoyed the process which would not have been possible if she did not win the Dorama Koushien.

Iitoyo said that she used to have some troubles during her senior high school days too so she could empathise with her character. In addition, she felt that senior high school students are bursting with freshness so the experience of reliving her youth through this drama brought back fond memories of that time when she was also a high school student. As for working with Kuribayashi, Iitoyo said that it was easy to work with her because the director would be frank in conveying her views so they could also do the same with her. Sugino also echoed her view and revealed that Kuribayashi was strict towards them and had high expectations since she is the president of her school's drama club. There was once when Sugino was told off for reading straight off the script when saying his lines without any emotions and that gave him a huge shock.