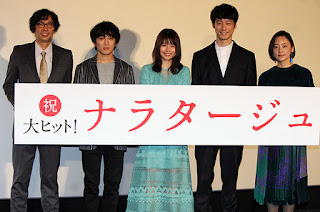 The first-day-screening event of new movie "Narratage" was held at TOHO Cinemas Roppongi Hills on 7 October which was attended by the director Yukisada Isao and cast members Matsumoto Jun, Arimura Kasumi, Sakaguchi Kentaro, Onishi Ayaka and Furutachi Yutaro. Matsumoto expressed his gratitude and joy that the movie was finally ready to be seen by everyone and hoped that it would make an impact on everyone's hearts.


The story is based on the same-titled novel written by Shimamoto Rio in 2005 when she was just 20 which was one of the nominees for the 18th Yamamoto Shugoro Award and sold 350,000 copies to date. Matsumoto plays the role of a senior high school teacher Hayama Takashi while Arimura plays his student Kudo Izumi. Due to their relationship, Izumi had to suppress her feelings for Hayama although she had been holding a torch for him. Years later when Izumi is an university student, she is asked to go back to the acting club of her senior high school to help out and reunites with Hayama which marks the beginning of their forbidden romance. Sakaguchi Kentaro plays the role of Ono Reiji, an university student who is Izumi's boyfriend and gets jealous over her love for Hayama.

Matsumoto commented that he learnt a new way of expressing himself through this movie and hopes to utilise this method even in the future. He expressed his thanks to the director and co-stars for making this an unforgettable work for him. Yukisada also echoed his view and praised his cast for helping him to make this movie.

Arimura recalled that even after the filming was over, she would feel really sad whenever she had to recall the emotions she went through while playing the heroine during the promotional interviews. She also said that the movie was a very memorable and significant project for her as she was just 23 when the filming took place. Onishi who plays Arimura's best friend in the movie, commented that she was also affected when she saw how the latter's character Izumi struggled in agony so she felt that the viewers would probably be able to understand the feelings of Izumi. As for Sakaguchi, he commented that his character Ono may seem like a detestable person at first but as the story progressed, he hoped that the viewers would understand his feelings and identify with what he did.

In line with the movie's theme of loving something till the extent of being unable to forget it or breaking down for its sake, Matsumoto said that he had met people like Nakamura Kanzaburo and Ninagawa Yukio who left a strong impression on him and wondered if he might be able to do the same to other people. As for Arimura, she cited her mother's cooking which was so delicious that she would never forget and craved for it whenever she was unwell or feeling down. Last but not least, Sakaguchi said that this might not be a positive thing but he could never forget the sight of his father crying.