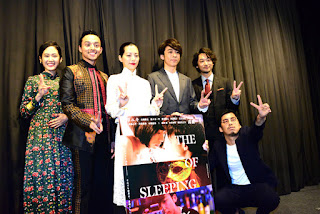 The completion screening event of new movie "THE LIMIT OF SLEEPING BEAUTY" was held at Shinjuku Musashinokan on 28 September which was attended by the director Ninomiya Ken and cast members Sakurai Yuki, Takahashi Issei, Sasaki Ippei, Abe Junko and Mitsushima Shinnosuke. The movie will be shown in cinemas from 21 October.


The movie is a remake of Ninomiya's 2014 independent film "Nemureru bijo no genkai" which won the judges' special award at the 2015 Yuubari International Fantastic Movie Festival. Sakurai plays the lead character Oria Aki who works as a magician's assistant in a circus troupe and has no purpose in life. As she gets hynoptised during a stage performance, she finds herself wandering between reality and an imaginary world where the only pleasant memories she has are those with her boyfriend Kaito (Takahashi).

Takahashi welcomed the audience which packed the small theatre of 123 seats and revealed that more than 3,000 applications were received for this event so those who were there managed to beat the odds. He also praised the young 25-year-old director for making a wonderful movie which was echoed by Mitsushima who said that he had wanted to work with a director around his age and was grateful to be able to work with Ninomiya this time along with staff members who he had collaborated with before.

When asked which moment in their life they thought was the best, Mitsushima and Takahashi both said that the present is always the best in their life. Takahashi also said that it was the first time he had heard the event host ask the media not to use flash when taking their pictures because there were too many of them and apologised for having to ask them to oblige with this request.

Sakurai commented on the movie as one which allows the audience to develop their views about the story as it progresses. Takahashi also revealed that the director did not give them detailed instructions on what to do and reacted accordingly to the situation while on the set. Ninomiya who wrapped up the event as the last person to speak, commented that he always thought of the cinema as a place to watch movies so it was surreal for him to be on the side of showing his work to the audience after his hard work over time. He hoped that the movie will be an emotional rollercoaster for the audience and will offer them some food for thought in their daily lives.

Email ThisBlogThis!Share to TwitterShare to FacebookShare to Pinterest
Labels: Movie News, The Limit of Sleeping Beauty