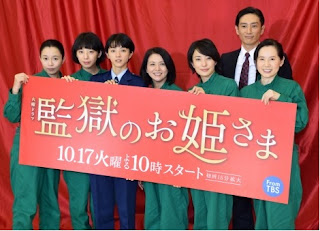 The production press conference of TBS Autumn 2017 drama "Kangoku no Ohimesama" was held on 11 October which was attended by cast members Koizumi Kyoko, Kanno Miho, Mitsushima Hikari, Kaho, Sakai Maki, Morishita Aiko and Iseya Yuusuke. The drama will begin its run from 17 October in the Tuesdays 10pm timeslot.


This drama which is written by Kudo Kankuro, is a comedy set in a female's prison about 5 women prisoners and their warden who get together to take revenge on a certain man. The story begins in the present when 5 women get together to abduct a handsome company president for the sake of taking revenge for one of them. However, things do not proceed as they imagined and there are many hiccups along the way. It is then revealed that these women had already planned this six years ago when they met in a female's prison. Koizumi plays the lead character Baba Kayo, a career woman who had a younger husband and a child but stabbed him out of anger when she found out that he was having an affair. As a result, she is serving a 5-year sentence for the conviction of attempted murder. Kanno plays a charismatic housewife Katsuda Chinatsu who was caught for tax evasion and is regarded as the leader among the female inmates while Sakai plays Daimon Yoko who resorted to embezzlement and fraud to get money for the purpose of supporting her favourite actor. Kaho plays Edogawa Shinobu who is the daughter of a dairy products manufacturing company's president and was framed for the killing of the vice president's lover and Morishita plays Adachi Akemi who took the rap for her gangster husband and ended up in jail for possession of illegal drugs. Mitsushima rounds up the cast as the female prisoners' strict warden Wakai Futaba who has a strong sense of justice and later participates in the revenge plot. Iseya Yusuke will be playing a baddie named Itabashi Goro, the handsome company president who the main characters want to abduct.

Iseya who is acting in his first private network drama, said that he was very surprised at the fast pace of filming for dramas as compared to movies and how the quality of the drama can be kept at a certain standard despite this. As such, to avoid posing an inconvenience to everyone, he will try his best to keep up with the pace even though he clearly had some difficulties adjusting to this new environment. Kanno who is also participating in a Kudo work for the first time with Iseya, said that the story has a lot of energy just like popcorn which is about to burst out and she will try her best to play her character in this drama without going too overboard in her acting.

Koizumi who appeared in the prisoner's costume along with her fellow "inmates", said that she feels as if she is reading an ongoing manga series and is full of anticipation to receive the next script which is very interesting. However, when they actually watch what they had filmed, the warmth and sadness coming out from the story is bound to attract everyone and she praised Kudo for his amazing script which managed to achieve this.

As for Mitsushima who plays the prison warden, she revealed that she gets to scold the inmates with all sorts of harsh words which makes her feel sad about it at times and wondered why Kudo must make her say such things. However, as the warden is supposed to keep the inmates in check, she also feels like their mother at times because she has to take care of them in the prison. On the other hand, Morishita joked that it has been a breeze to play a prisoner this time since she doesn't have to put on make up and only has to wear a prisoner's uniform which made everyone burst into laughter.