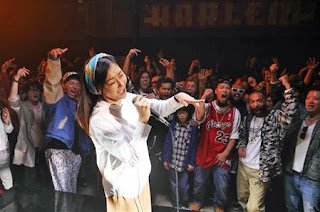 In the story titled "Freestyle Okaachan" (Freestyle Mother), Nakayama plays the lead character Hosokawa Fusako with a salaryman husband who has no interest in his family and her only son in junior high school who has started to ignore her. Fusako works part-time but due to her introvert character, she doesn't even stand up to her manager who commits sexual harassment against her. One day, she encounters a strange stallholder who makes her buy an expensive lip cream which is said to be able to relieve stress. When Fusako applies it to her lips, a strange thing happens as music appears in her mind and she is able to do freestyle rap like a professional. This allows Fusako to become the strongest rapper and engage in a rap battle at the end. Co-stars include Itou Seikou and hip-hop group Scha Dara Parr's ANI.

Nakayama commented that in order to cope with the freestyle rap scenes, she had to practise a lot but found it difficult because of the lack of music scales and wondered if she could manage it. As for the highlight of this drama, Nakayama cited the last scene but stressed that the entire story is interesting as well. Compared to her first performance 27 years ago which was a horror story, the story this time is of a different genre so she was able to approach the filming with a totally different feeling.