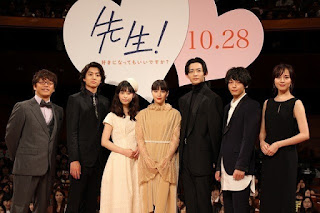 The completion screening event of new movie "Sensei!" was held at Tokyo International Forum on 26 September which was attended by the director Miki Takahiro and cast members Ikuta Toma, Hirose Suzu, Ryuusei Ryo, Morikawa Aoi, Kentaro, Nakamura Tomoya and Higa Manami. The movie will be shown in cinemas from 28 October.
The movie which is based on the same-titled manga by Kawahara Kazune that was serialised in Bessatsu Margaret between 1996 and 2003 and had sold more than 5.7 million copies to date, features Ikuta as a world history teacher Ito Kousaku who seems aloof on the surface but treats his students very well and thinks a lot for them. Upon interacting with Ito, his student Shimada Hibiki (Hirose) falls in love with him and confesses her feelings for him. However, Ito is hardly moved by this as he had grown to distrust women due to his last breakup. Nonetheless, Hibiki's love finally moves him and the two of them begin a forbidden romance as they grapple with the tough circumstances they are in.

At the beginning of the event, Ikuta held Hirose's hand and escorted her onto the stage. He also praised his co-star for being so cute in this movie that it will be some years later before anyone can come close to her in terms of cuteness. Hirose was also full of praise for Ikuta and said that he was so cool and good-looking.

Before the event, there was an open call to the female junior and senior high school students nationwide to send in their love troubles which led to 6,000 responses being received. With regard to one of the questions asking how someone can make the guy of her dreams treat her differently from other people, Ikuta wondered what the sender meant by being different while Hirose used a very old-fashioned example of cutting an eraser by two and giving one half to the girl even though there were a  number of girls who also did not have one to illustrate what she meant by being different. Upon hearing this, Ikuta joked that the sender of this question can try this method of sharing one half of her eraser with the guy as per Hirose's advice.