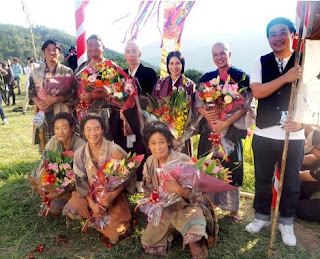 The filming for NHK Taiga drama "Onna Joshu Naotora" was wrapped up at Kurumeki Tanada in Hamamatsu City, Shizuoka Prefecture, on 11 October where cast members such as Shibasaki Kou, Ichihara Hayato, Komatsu Kazushige, Kinoshita Takayuki, Kimoto Takehiro, Yamanaka Takashi, Maehara Kou and Morishita Yoshiyuki gathered for a scene in the last episode i.e. Ep 50 due to be shown on 17 December. Tanaka Mio who was not filming that day, came to celebrate the wrap-up with his co-stars at this place which was already featured before in the earlier part of this drama.


Shibasaki commented that she was worried initially whether she could manage the one-year filming period and wondered if she might feel burnt out at the end although she was honoured to be given the chance to become a Taiga drama lead. However, to her surprise, she found that she was still very energetic even when the filming was concluded and felt very fulfilled and satisfied by what they had achieved. She reflected on the filming that it had been very stimulating to work with many professionals who love their work and was happy that they finally finished the filming. She even said that she had the energy to go on for another year and hoped to be able to work with everyone again.

With regard to her new career as the owner of a company, Shibasaki said that everything she is doing, be it acting, singing, producing or doing behind-the-scenes work are all related so she hopes that her new venture will be a driving force to create new things.