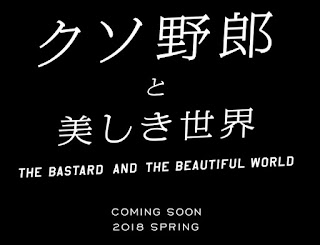 Inagaki Goro, Kusanagi Tsuyoshi and Katori Shingo will be producing a new movie titled "Kusoyaro to utsukushiki sekai" (The bastard and the beautiful world) which is scheduled to be shown in cinemas during spring 2018. According to the announcement released at 3am on 16 October via their official website "Atarashii Chizu", the trio commented that the purpose of making this movie is to make their fans nicknamed NAKAMA happy. When asked by the media, the trio's representative law firm said that part of their fanclub membership fee income will be channeled to the production budget of this movie. Details of the cast and director have yet to be confirmed.


During an appearance on TOKYO MX variety show "Goji ni muchuu!" on 24 October, Inagaki gave some information about their new movie. He revealed that they are in the midst of discussions with their staff and that the cast lineup, staff and director are not confirmed yet. As for whether the movie will be released in a novelised version by him, Inagaki joked that he definitely won't be able to write this so this is unlikely to happen. Since this is the first time that they are making a movie, they hope to be able to make something which will meet the expectations of everyone. When asked if there was going to be a crowdfunding exercise to get funds for the movie, Inagaki said that they are still exploring various possibilities so they will release the information as soon as they have finalised their plans and did not rule out the possibility of crowdfunding.