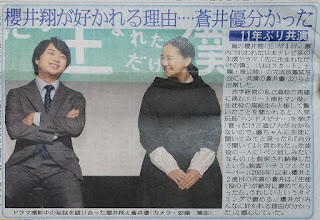 The preview screening event of NTV Autumn 2017 drama "Saki ni umaretadake no boku" was held on 4 October which was attended by cast members Sakurai Sho, Aoi Yu, Igawa Haruka, Takashima Masanobu, Kazama Morio and the scriptwriter Fukuda Yasushi. This drama will begins its run from 14 October in the Saturdays 10pm timeslot.


The original story features Sakurai as Narumi Ryosuke, a 35-year-old former businessman who is transferred by his company Kashimatsu Bussan to become the principal of a private senior high school named Kyoumeikan Koukou and turn its fortune around. The struggling school's results are on the lower end of the spectrum, its sports teams aren't doing well in competitions and its enrollment numbers are about to slide below the minimum level required to keep it afloat. Narumi knows nothing about education nor managing a school so he has to rely on his knowledge as a businessman to deal with the situation and introduce reforms in Kyoumeikan with the aim of boosting enrollment numbers, improve the quality of the teachers and students and make the school profitable again. He is met with strong resistance from the students who have never savoured success and the teachers who have no motivation to improve but tries to show them the reality and harsh truths of society through his first-hand experience. The heroine Mashiba Chihiro who is at loggerheads at first with Narumi but later gets inspired by him will be played by Aoi Yu while Narumi's girlfriend cum former colleague Matsubara Satoko will be played by Tabe Mikako.

Sakurai and Aoi who last worked together 11 years ago in the 2006 movie "Hachimitsu to Clover", said that he hoped to work with her again and hopefully play a married couple next time since he was holding a torch for her character last time. Although he had wondered how it would be like to work together with Aoi after a gap of more than 10 years, their chemistry came back naturally while filming this drama. As for Aoi, she suggested that she should play a teacher while Sakurai plays a night school student the next time they work together because she would like to see in a role which deviates from his usual smart intellectual image.

While filming the scene of the first day, Sakurai was told by the director Mizuta Nobuo to give a speech to the young actors playing students based on his experience of juggling his showbiz career and studies which made Mizuta marvel that Sakurai had blended himself fully into his character. In response, Sakurai said that he didn't say anything that great during that speech. Aoi then chipped in to reveal that she could finally understand why Sakurai was well-loved by everyone especially the student actors because he knew when to praise and encourage them when they were all very nervous about their acting in this drama.

There was a scene where Sakurai had to say 15 pages' worth of lines at one go which made Kazama marvel at his performance because it was already tough to memorise 3 or 4 pages of lines. Sakurai commented that it would be disrespectful for him not to memorise his lines properly while working with the great actors around him so he had to make sure that he didn't mess up.

The drama's filming was completed in mid August.