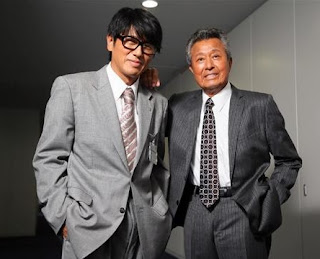 Takahashi Katsunori will be returning in the new AbemaTV drama series "Tokumei Kakaricho Tadano Hitoshi AbemaTV Original 2" which will be shown over 5 consecutive nights at the end of this year. The first season shown via AbemaTV online in January this year achieved 8 million views thus leading to the sequel.

Takahashi will reprise his role as Tadano who is the section chief in an advertising agency while Umemiya Tatsuo will play the chairman of the agency who gives orders to solve various problems within and outside the company. This time, the sequel's theme will be on the chairman's supposed retirement which suggests that this may be Umemiya's last appearance since he participated in the first series back in 2003 when the drama was shown on a private network. Umemiya who underwent surgery in July last year for early stage duodenum papilla cancer, made his return to work in the January series and is currently going for regular follow-up once every two months.