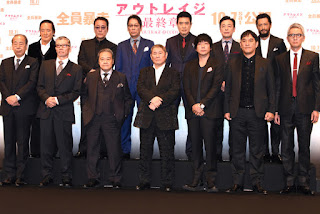 
As for why he decided to make this concluding installment to the "Outrage" series, Kitano said that he wanted to remove the likelihood of those characters who had died in the past from returning in future sequels which would be highly likely if they continued with the series. He also related how he was asked by people he met in Europe whether he had any interest in other genres besides violence. Kitano said that he wants to do a pure love movie next time so that's why he wrote such a novel recently. If it turns out to be a flop, he will give himself another chance before returning to violence movies. Kitano then said that he was very thankful for the star-studded cast of actors who are top representatives of Japan's movie scene and how they were OK with his improvising things on the set which would tend to deviate from the script. However, he said that Nishida's ad-libs were really troubling for him which made everyone burst into laughter.

Nishida revealed that he had started filming this movie right after he got discharged from the hospital for treatment of cervical subluxation while Shiomi was recovering from cerebral hemorrhage at the same time. As such, the filming turned out to be somewhat like rehabilitation for the both of them as they had to be carried in by others on the first day of the filming. In his case, he couldn't turn his neck when he was turning back and had to turn his entire body so Nishida joked that the audience should look out for such scenes in the movie.

Oomori related that how he had always wanted to participate in the "Outrage" series but never got a chance. In the first installment, Kase Ryo managed to land a role in the movie which made him very jealous. By the time Part 2 came along, he tried to lobby for a chance but found that Kiritani Kenta and Arai Hirofumi got into the cast and got even more jealous. As such, when he heard of this last installment, he tried his best to win a role and was very happy to be able to realise his dream.

Taki who is appearing in a Kitano movie for the first, said that he actually had some confidence in himself but when surrounded by so many of his seniors, he began to realise that he was still far from it. As for Matsushige who also appeared in the 2012 "Outrage Beyond", he joked that he was thinking that there would be a sequel someday and had spent the last 5 years in anticipation. However, now that the series had ended, he wondered what was left to look forward to in future. Oosugi who has appeared in 10 Kitano works to date, he revealed that he actually heard people from the suburbs telling him that they had watch the first two installments of "Outrage" but he found it hard to tell them that he actually didn't appear in those two movies.