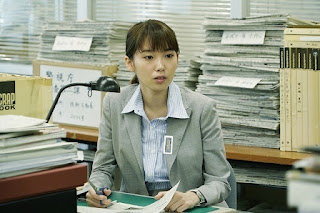 Iitoyo Marie will be the heroine in new WOWOW drama "Ishitsubute Gaimushou kimitsuhi wo abaita sousa nika no otokotachi" starring Sato Koichi and Eguchi Yosuke which will begin its run from 5 November in the Sundays 10pm timeslot. The drama which consists of 8 episodes,  is based on a true case which was uncovered in 2001 and involved the defrauding of secret funds from the Ministry of Foreign Affairs. The investigation officers faced an uphill task of venturing into the sacred territory of the country and had to fight the forces within the organisation to uncover the truth in this case caused by the "three evil men" i.e. high-ranking officers in the ministry. Sato will be playing Kizaki Mutsuhito who is involved in the investigation while his superior Saimi Teruaki will be played by Eguchi.

Iitoyo will be playing Yakura Kasumi who is a corporal working in the second investigation section which is taking up the case. Being freshly transferred from a local police station, Yakura knows practically nothing and ends up being dismissed by her colleagues due to her lack of knowledge. However, Kizaki helps her to get better at her work and be accepted by her colleagues as the investigation progresses.

With regard to her character, Iitoyo said that Yakura is a very strong-minded woman who believes in working hard. As such, she will try her best to show Yakura's traits with her acting although she admitted that she was not used to the fashion style of Yakura that required her to leave the top two buttons on her blouse undone which resembled Buruzon Chiemi's mature woman style. She then negotiated with the staff to have only the first button undone. As she was born just one year before the case happened in 1989 and got exposed in 2001, she was shocked when she heard about this case after she took on this role and hoped that more people in her generation would come to understand what happened through this drama.