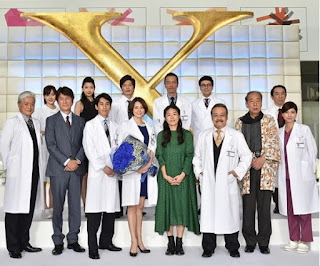 "Doctor X" began in October 2012 and has accumulated a total of 4 full-length series (39 episodes) and 1 SP where Yonekura had spoken the signature line of Daimon Michiko i.e. "watashi, shippai shinai no de" for 70 times to date. In line with this, the cast were given a quiz to guess how many times Yonekura had said this line where they would get a sirloin steak from the teppan restaurant Ukaitei in Ginza frequently featured in the drama (it has already been featured twice to date in the filming for Season 5). Yonekura guessed 81 times but Nishida was closest to the answer with his guess of 69 times and got to feast on the two slices of wagyu steak worth JPY 180,000.  He was full of praise for the steak and even fed a small piece to Yonekura. Endo who was second closest with his guess of 72 times, was teased by Yonekura for missing out on the steak before Nishida also cut a piece for him to try. Kishibe then asked for the same and was fed by Nishida on the spot.

Yonekura revealed that she never imagined herself to be playing Daimon for so long and was especially happy with the response from everyone. As such, she remarked that she must be closer to the image of Daimon than what she thinks. However, when she saw footage from the first season, Yonekura poked fun at herself and said that she had aged a lot since then. During the press conference, Yonekura was presented with flowers from national soccer team player Sawa Homare who expressed her anticipation at seeing the new drama.

The new season will be shown in more than 200 countries and territories thus making it the first among TV Asahi's dramas to date.