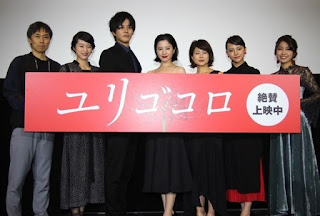 The first-day-screening event of new movie "Yurigokoro" was held at Shinjuku Wald 9 on 23 September which was attended by the director Kumazawa Naoto, cast members Yoshitaka Yuriko, Matsuzaka Toori, Satsukawa Aimi, Seino Nana, Kiyohara Kaya and Rihwa who sings the theme song "Michishirube" for the movie.


The story is based on the same-titled novel by Numata Mahokaru that was published in 2011 and features Yoshitaka in her first murderer role to date. One day, a family comes to find a diary belonging to someone from their dying father's study which describes how the person killed multiple people but they are unable to tell if this is a fictional story or a real account by the person and why this was written. Yoshitaka plays the heroine Misako described in the diary who is destined to kill people so as to be at peace with herself emotionally. However, when she comes to understand what true love is, she tries to fight against her fate and struggles with the resulting internal turmoil.

Kumazawa commented that this was a movie which Yoshitaka bled and shed tears for and he was confident that it would become her signature work for the next century. Yoshitaka commented that this movie was tough on her in many ways and she would be happy if many people could watch it. She also revealed that she had to cry for two consecutive days when filming the climax scene.

When asked about what they thought was pure love, Matsuzaka said that he came to know about what his father had said to his mother when he proposed to her where he told her that he would die if he couldn't marry her. He exclaimed that he didn't ever say such lines even when acting in dramas so he thought that this was a classic example of pure love. However, when he asked the actresses on how they thought about such a proposal, Yoshitaka made everyone by describing this as a crazy form of intimidation under the pretext of pure love but it was perfectly OK since love is violent by nature anyway. As for Yoshitaka, she said that her love for highball was what she considered as pure love since she got her first alcohol CM deal after turning 20 and has loved this drink so much that she drinks it everywhere.

As Matsuyama Kenichi and Kimura Tae had to be absent from the event due to work, Kimura recorded a video message while Matsuyama wrote a letter to be read out to everyone. Kimura praised Yoshitaka for being a very wonderful actress while Matsuyama said that he was happy and blessed to be part of the family which made this movie.

During the event, Rihwa performed the theme song live which led Yoshitaka to say that the song was so suitable for the movie and she felt good about hearing it in person. Rihwa then said that she was able to show the dark side of love for the first time in her song which also happened to be her first movie theme song.