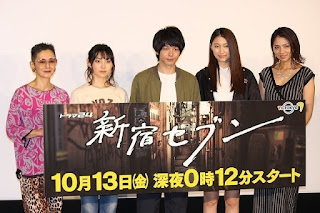 The completion screening event and press conference of TV Tokyo Autumn 2017 drama "Shinjuku Seven" was held at its HQ in Tokyo on 10 October which was attended by cast members Ueda Tatsuya, Nakamura Tomoya, Ohno Ito, Nonami Maho, Ieiri Leo and Natsuki Mari. The drama begins its run from 13 October at 12.12am on Fridays.

Ueda who is known for his cool image, had another side of him exposed by his co-stars. Ohno remarked that while they are talking, Ueda is smiling about 70 to 80 percent of the time so she was shocked by his smiling face especially since she had a different impression of him from the TV programmes and magazines she had seen since she was in primary school. Ieiri who is making her debut in a drama, said that she had a similar impression of Ueda and thought that it might be difficult to speak to him but it turned out that he was very considerate of her and kept trying to put her at ease. Nonami then added that Ueda is a very calm and gentle person who takes the initiative to consult his co-stars when discussing what to do during the filming. In response, Ueda said shyly that he smiles because he likes everyone who is working on this drama with him.

The cast also revealed that Ueda buys a lot of snacks and refreshments for the cast and staff members. Nakamura recounted that there was once when a young staff member in charge of costumes said that she wanted to eat crepes and Ueda simply said nothing on the spot and arranged for the crepes to be served to everyone in the evening on the same day. This led Nakamura to joke that he is a rich star who can afford to do so. Ueda said that it's not because of that but rather as he gets older, he likes to see the happy faces of those younger than him as it makes him happy. Upon hearing this, Nakamura said that he wants a car which made Ueda say that Nakamura's already above 30 and is hardly considered young in his eyes.

On the other hand, Natsuki said that she thought that Ueda seemed sad because they had to exclude him from the photos which the cast took for the purpose of uploading to the drama's social media accounts since Johnny's Jimusho doesn't allow the photos of their artistes to be posted online. Although he looked lonely when he said that to her quietly, Natsuki found this side of him to be charming. Ueda was sad that he was not asked to take photos together and he felt that the actors got closer together as a result of taking such photos but nobody approached him to take such photos. Natsuki reminded him that they might be "punished" if they take such photos so they were trying not to make things difficult for him. Nonetheless, Ueda called upon his co-stars to take photos with him and keep these for their private use.

With regard to taking on the leading role for the first time, Ueda said that there are a lot of similarities between him and his character Nanase so he had a good time playing Nanase as he could do as he wished. However, when he was asked to differentiate between a 700 yen and 30 yen banana together with Nakamura, he actually got the answer wrong which led the latter to joke that he should be playing the appraiser Nanase. As for working with Nakamura, Ueda said that he had a hard time trying to hold in his laughter thanks to his co-stars ad-libs.