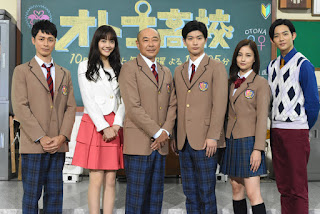 
The story features Miura as a 30-year-old elite salaryman Arakawa Hideto who works at a top bank after graduating from University of Tokyo. On the surface, he has everything in life but nobody knows that he is still a virgin and has zero dating experience even though he actually craves for love and sex. As the government wants to deal with the problem of low birth rates, a new law mandates that anyone who is above the age of 30 but has no sexual experience i.e. a group of people nicknamed "Yaramiso" which literally means reaching 30 without having done it, will be sent to an adults' senior high school. The sole condition to graduate from this school is that the person must have lost his or her virginity. Hideto is aghast to get sent to this high school against his will and does not even know how the government found out about his virgin status. In order to get out of this fix, Hideto has to learn about romance in this school and aim to graduate as soon as possible. However, his arrogance and pride gets in the way as he loves to look down on people, analyse people too much, show his boredom blatantly during a date which makes it look virtually impossible for him to graduate. While learning from his fellow classmates in their 30s to 50s who are equally clumsy in love like him, Hideto experiences a renewal of his teenage years and becomes a better person as time goes by.

Miura commented that this role is a challenging one in his career so far and he hopes that this drama being the first in TV Asahi's new drama timeslot, will be one which cheers up the viewers. However, there are many suggestive lines in the script especially in the first episode when his character gets overwhelmed by the endless string of words hurled at him by the teachers so they are all trying to be unaffected by their embarrassment when saying these lines which usually won't appear in real life.

When asked about who they would like to date in the cast, Miura said that Takahashi's role Gonda will be a good choice because he's good at work and a considerate and humourous guy although his only flaw is still being a virgin at the age of 55. Upon hearing this, Takahashi clarified that Miura was referring to his character, not himself but Miura added that he meant both his character and Takahashi himself. On the other hand, Ryuusei chose Miura who he described as a nice and gentle elder brother even though they are working together for the first time. Yuuki then chose Takahashi while Matsui and Kuroki chose each other. Last but not least, Takahashi chose the assistant producer Hikita Risa for being cute but merciless with words so he likes to be scolded by cute women and joked that he hoped something can develop between them. However, Takahashi made everyone laugh when he concluded if something does happen between them, that will be the end of this drama so he was just saying this for fun.

Kuroki who plays a 32-year-old virgin having an affair with her superior at work, revealed that she was wondering what the casting director was thinking of by choosing her who is a mother of 2 to play this character. However, once she heard that Takahashi was part of the cast and plays her classmate, she became convinced that it was OK for her to take on this role. When asked if she would like to go back to being a senior high school student, Kuroki said that she doesn't like to go back to the past and would like to head forward only.