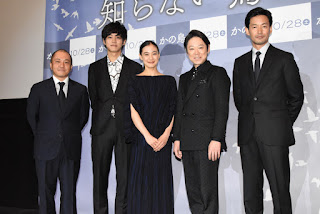 The Japan premiere event of new movie "Kanojo ga sono na wo shiranai toritachi" was held at Shinjuku Wald 9 on 28 September which was attended by the director Shiraishi Kazuya and cast members Aoi Yu, Abe Sadao, Matsuzaka Toori and Takenouchi Yutaka. The movie will be shown in cinemas from 28 October.


The movie which is based on the popular mystery novel by Numata Mahokaru, depicts how a self-centred woman Towako (Aoi) is still pining for her ex-boyfriend Kurosaki (Takenouchi) even after breaking up with him 8 years ago and has the tendency to complain about everything. While wallowing in self-pity, she has an affair with a married man Mizushima Shin (Matsuzaka) and also lives together with a man Jinji (Abe) who is 15 years older than her but is penniless and has no achievements to speak of. One day, when Towako comes to know that Kurosaki has disappeared, this marks a drastic change in her life.

As the novel is said to be one where readers would not be able to identify with the characters in the story, Aoi commented that she was concerned whether everyone would hate her after watching this movie while Matsuzaka joked that he saw some members of the audience holding fans bearing his name but they might just throw the fans away on their way out of the cinema.

With regard to her character Towako, she described the latter as a woman who has her feminine traits frozen and gradually rotting over time. As she read the script, she thought that Towako was already very bad but it turned out that the story was a battle to see who was the worst jerk of them all since Matsuzaka's and Takenouchi's characters were as worse as hers. Abe echoed her view and said that the characters were all so bad that you couldn't help but laugh and cry at what they were doing, In particular, the audience would probably feel like killing Kurosaki and Mizushima. Nonetheless, Takenouchi said that they had a lot of fun during the filming although Matsuzaka said that his character would be viewed as the worst enemy of women.

Although all the characters in the movie are said to be scumbags, the cast all picked Matsuzaka's role as the worst among them. Aoi praised Matsuzaka for immersing himself fully into the character as if he was Mizushima himself. In response, Matsuzaka said with a wry smile that he was worried about the side effects of his character having an impact on how the viewers would see him in the morning drama "Warotenka" to which Aoi teased him that he might have his airtime cut.