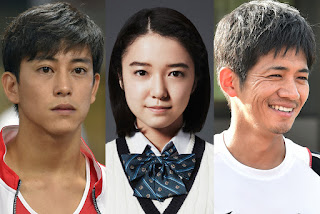 Kamishiraishi Mone, Wada Masato and Sano Gaku will be joining the cast of TBS Autumn 2017 drama "Rikuou" which begins its run from 15 October in the Sundays 9pm timeslot. The drama which is based on the same-titled novel by Ikeido Jun, features Yakusho Koji as the lead character Miyazawa Koichi who is the 4th generation president of Japanese socks manufacturer Kobaseya based in Gyoda City, Saitama Prefecture, which has been in business for more than 100 years. With the decline in demand for its products, the small company which has only 20 employees, strives to rejuvenate its business by entering the field of producing running shoes which feel as if you are barefooted. However, as the industry is very competitive and the company does not have sufficient funds, Kobaseya is faced with various challenges along its journey but Miyazawa strives on with the help of the people around him as they take on the bigwigs.

Kamishiraishi will be playing Miyazawa's daughter Akane who she described as someone who is innocent and always thinks of her family's interests even though she may not show it consciously. As for Wada, he will be playing Hirase Takao who is the teammate of Mogi Hiroto (Takeuchi Ryoma) in the professional running team of Daiwa Shokuhin and a veteran runner conscious of his limits due to his injury while Sano will be playing Kezuka Naoyuki, an elite runner who belongs to the rival team of Asia Kogyo. Wada had experience being a runner of a professional team so he was surprised about being able to play a runner as an actor in this drama. Coincidentally, Hirase has a similar destiny as him since they both went through days of glory and face setbacks and troubles so he hopes to show how Hirase goes all out to live to the fullest.  As for Sano, he revealed that he had gone through running training before the audition for this drama as he wanted very much to take part in this drama. Since this will be his second appearance in a drama based on an Ikeido novel (the first being "Shitamachi Rocket"), Sano feels that the experience this time will change something for him and he hopes to give his all to this drama.