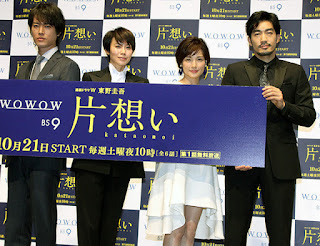 The screening event and press conference of new WOWOW drama "Kataomoi" was held on 1 October which was attended by cast members Nakatani Miki, Kiritani Kenta, Kuninaka Ryoko and Otani Ryohei. The drama will begin its run from 21 October in the Saturdays 10pm timeslot.

The drama which consists of 6 episodes, is based on the same-titled novel by Higashino Keigo. Nakatani plays the lead character Hiura Mizuki who is a woman with gender identity disorder. After a reunion dinner in the summer of 2017 with her friends in the American football team which she used to be the team manager for, Mizuki admits to her teammates that she had murdered someone and that she is living as a man named Kanzaki Mitsuru now and works at a club in Ginza. Faced with such a shocking revelation, Mizuki's friends try to find out the truth behind her revelation in a bid to protect her. However, as they gradually unravel the truth, they are faced with the harsh truth and how to decide what's best for everyone. The meaning of "one-sided love" in the title will also be explained as the story progresses. Kiritani plays Nishiwaki Tetsuro who is a sports instructor and had married Risako (Kuninaka) who used to be the team's manager along with Mizuki and is working as a freelance cameraman now. Otani Ryohei plays Hayada Yukihiro who is working as a news reporter while Mizuki's former boyfriend Nakao Kousuke will be played by Suzuki Kousuke.

In order to look convincing as a woman who lives like a man, Nakatani revealed that she tried to build up her body by doing muscle training, eating 2 to 3 slices of fillet steaks, 2 to 3 eggs and drinking protein drinks. Kiritani said that even though there is a scene showing the difference in strength between Mizuki and a typical man, he was surprised by the extent she went to in order to build up her well-toned arms.

Mentally, as her character's "love interest" will be Risako (Kuninaka), Nakatani joked that she tried her best to make Kuninaka fall for her but it was just too bad that she lost to Mukai Osamu (Kuninaka's real-life husband). Nakatani then described Kiritani as a handsome guy who looks cool if he keeps quiet but ends up being a funny person once he speaks. She also expressed her "jealousy" upon seeing how Kuninaka would smile in front of Kiritani when they had scenes together. In response, Kuninaka said that it was fun to play a strong-headed and opinionated woman who was having issues with her husband in this drama.

As there is a kissing scene between Nakatani and Kuninaka in the drama, the latter admitted that even though she was supposed to be on the receiving end, she was very nervous about it but it turned out to be a gentle kiss. As for Nakatani, she commented that she didn't want to get "disliked" by Kuninaka and went to great lengths to make sure that her breath didn't smell bad such as brushing her teeth, chewing mint and spraying fragrances. Nakatani also "complained" that she had done kissing scenes with other actresses many times to date and wondered why this always happened. However, she did reveal that the kissing scene this time was the longest and most romantic she did so far with another actress.

As the day of the event happened to be Otani's 37-year-old birthday, Nakatani presented a bouquet of flowers to him. Otani revealed that although they only had one scene together, Nakatani was very kind to remember him when she provided refreshments for the staff and cast and even gave him a handwritten letter. As such, he felt that she was such a wonderful senior and was surprised by her unexpected gesture.

In line with the theme of the drama, the cast were asked about what they were holding a torch for. Nakatani said that although she loves carbohydrates and sweet things, her body can't take such things like white rice and udon. As such, in order to replace these in her diet, she has to eat quinoa and soba instead.

Since this was the first public appearance of Kuninaka after she announced her second pregnancy, the media offered their congratulations to her at the end of the event which she thanked them for. However, when asked about her condition, she did not answer and simply smiled at them while leaving the venue.