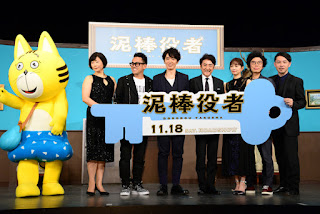 The completion screening event of new movie "Dorobo Yakusha" was held at Toyosu PIT on 21 September which was attended by the director Nishida Masafumi, Maruyama Ryuhei, Ichimura Masachika, Yusuke Santa Maria, Ishibashi Anna, Miyagawa Daisuke, Katagiri Jin and Minemura Rie. The movie will be shown in cinemas from 18 November.

Maruyama plays the role of Onuki Hajime, a welder who used to be a thief and is living a happy life with his girlfriend now. One day, he happens to meet his former partner in crime Hatakeyama Norio and is forced to break into the residence of a picture book author to steal. Although he makes it successfully into the house, he gets discovered by various people and has to assume different identities such as the houseowner, picture book author and editor in order to prevent being exposed and arrested by the police.

The cast appeared one by one at the start of the event by walking through the door set up on the stage while Maruyama appeared from the safe instead. He commented that he was scared by being inside the safe as he didn't like the small and confined space and was teased by Yusuke for not wearing underwear today.

When asked about any memorable episodes on stage, Yusuke stated that Miyagawa had something to share which led the latter to "protest". Miyagawa then related that they were filming at the front of a train station when he reunited with his ex-girlfriend who he dated when he was 19. When he said that his ex-girlfriend even showed him the photo of her child even though he didn't ask for it, the audience laughed at this revelation.

In line with the movie's theme, the cast were asked what they would like to steal. Ishibashi said that she wanted a device which could turn tap water to alkaline water while Katagiri and Minemura wanted money and a cat respectively. As for Ichimura, he wanted a mix of Maruyama's youth, Ishibashi's beauty and Katagiri's humour which led Maruyama to protest that he is at least an idol and wondered why Ichimura didn't want his looks. Maruyama then followed up by saying that he wanted to steal the hearts of every woman in Japan which led Yusuke to say that he shouldn't be saying such a thing.

Before their filming, some of the cast members gathered at Maruyama's place for a script reading session. Miyagawa commented that Maruyama's apartment was a typical guy's place with alcohol and bass guitars but Ichimura joked that there were no signs of a woman's presence as it was not very clean.

At the end of the event, Maruyama called upon everyone to support this movie which he said will help viewers forget all the bad things in their lives and going on around them and hopes that they will discover what's most important to them after watching this.