Having watched the anime version of Jigoku Shoujo prior to the drama remake, I had my reservations about this version for a couple of reasons.

First of all, being quite familiar with the story would mean that I would know how the story progresses. And this bothered me in the first 10 minutes of this episode because I knew exactly that the story was rehashed from the first episode of the anime. Although it comes with a different title i.e. the anime's first episode's title was Yuyami no Kanata Yori (From the Other Side of Twilight) and the setting was slightly tweaked, I couldn't help but feel bored initially. In the drama, the main character for this episode is a senior high student who gets bullied by 3 girls because of her securing a place in university due to the school's recommndation. However, in the anime, the bullied girl was a junior high student who was bullied without any special agenda right in the beginning.

Well, given that the drama and the anime is essentially based on the original manga, it's inevitable that they will show the same stories. However, the drama has only 12 episodes as indicated on the official website so I'm hoping that the selection of the stories to be featured will be done with caution so that they do not end up boring the viewers. As it is, episodic stories without much advancement in the main plot would tend to be repetitive so I'm quite glad to see that they will introduce Shibata Hajime and Tsugumi from Ep 3. These two characters will be of great importance in unravelling the mystery behind Enma Ai's background.

Initially, I was also worried that the story would be over-stretched if it spans 45 minutes like the usual dramas but it was good that they kept it short and sweet at less than 30 minutes just like the anime.

Besides the similarities, the cast selection is also something which I couldn't help comparing. First of all, Iwata Sayuri who plays Enma Ai sounds so close to Noto Mamiko, the seiyuu who plays Ai in the anime. I wonder if her original voice is like that or whether she was trying to sound close to Noto's voice. In any case, I must say that I prefer Noto's voice though. Iwata sounds too squeaky and high-pitched for my liking. Appearance-wise, Iwata does look quite close to the Ai in the anime and the mannerisms were similar so I guess it's largely due to her own effort and the production crew in trying to stick to the original. Nevertheless, since her appearance airtime is too little, I think I won't write her off completely until a few more episodes later.

With regards to her subordinates namely Ichimoku Ren (Kato Kazuki), Hone-Onna (Sugimoto Aya) and Wanyuudou (Ogura Hisahiro), I feel that they do resemble the original characters to a certain extent, at least in terms of their images. However, just like Ai, their appearances are very limited so it doesn't show as yet whether they can convey the distinctive traits of their characters. Among them, I think Sugimoto looks so close to Hone-Onna especially the feminine and sexy side of her so I think she's perfect for this role.

Last but not least, an issue I have with the drama adaptation is the way the punishment is meted out. In the anime, the producers have the luxury of CG to design elaborate punishments which is one of the highlights in the story but in the drama, the manner it was done proved to be plain and it was over in a matter of less than 3 minutes. What an anti-climax it proved to be! The sight of Ren and Hone-Onna carrying the girl who was to be sent to hell just made me chuckle about their lack of "resources".

I'll probably continue to watch this for a couple of episodes before deciding whether this is worth my time to stay throughout the entire run. Unless the repetition gets to me or I do not see any improvements in the storyline, I think it's likely that I can bear with the differences with the anime or any little issues I have with the drama adaptation.
Posted by Chiaki at 7:45 PM No comments: 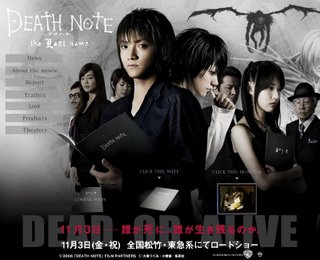 2) The Devil who wears Prada

4) Flag of our Fathers

10) Shichigatsu Nijuuyokka Doori no Christmas
Posted by Chiaki at 9:49 PM No comments: 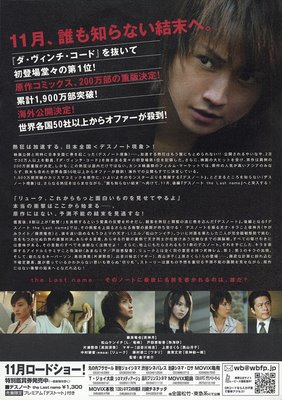 4) Flag of our Fathers 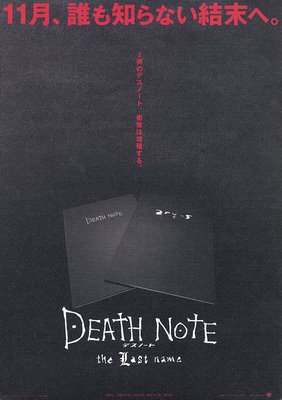 3) Flag of Our Fathers 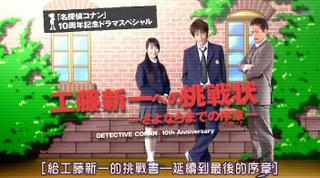 As I've never read the manga or watched the anime of "Meitantei Conan", I have no idea how the story goes or the traits of the main characters. In view of this, I approached this story without any prejudice and thought of this as a mere detective story. Frankly speaking, after watching this SP, I don't feel any interest with regards to finding out more on the original story since the adaptation doesn't impress me that much after all. That's not to say that the SP is badly done, it's just that I've seen much better stories from Kindaichi Shounen no Jikenbo and Tantei Gakuen Q so I find the case presented in this SP not as challenging. The suspects are easy to spot so that only leaves how to figure out the tricks to lead to the truth. Maybe the general consensus that Kindaichi fans and Conan fans cannot see eye to eye on which story is better, does hold true.

With regards to the cast, I think the lacklustre story did not provide them with too many chances to shine. I have no idea how the original characters are supposed to be so I don't have any basis for comparison. I'm not sure whether the problem lies with Oguri Shun or rather the fact that Kudo Shinichi's tendency to put on a kakkoii front irks me very much but you can be sure that I don't have any liking for this lead character. In fact, I find the supporting characters like Mori Kogoro (Jinnai Takanori) and Megure (Nishimura Masahiko) more interesting since they add a lot of humour to the storyline. Otherwise, I really think none of the cast members caught my attention in a good way since I was practically dozing off until they got to the resolution segment.

Judging from the way the SP ended and how they went to lengths to use the anime and describe how Shinichi became Conan, I guess there is a high possibility that NTV may do another SP or full-length series which means that it's impossible for Oguri to play this role again. Seems like NTV has the tendency to use drama SPs as a form of testing to see how the viewers react before investing heavily in a regular season drama and this looks like a good method by far. Given that Conan has been going on for at least 10 years, there should be a strong fanbase to tap on which could lead to a regular pool of viewers tuning in if there's a drama adaptation.
Posted by Chiaki at 9:56 PM No comments: 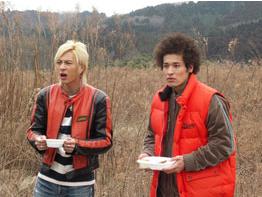 2) Flag of our Fathers

10) Tonmakkoru e Youkoso
Posted by Chiaki at 5:25 PM No comments: 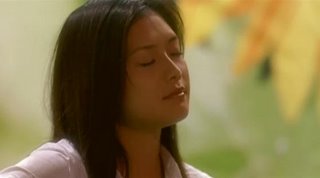 As compared to the drama version which I couldn't watch beyond the first episode (partly because of the two leads which I had grown to dislike and the slow pace of the story), the movie version exceeded my expectations because right in the first place, I wasn't very optimistic about a simple love story like this to keep my attention for 2 hours. However, the simplicity turned out to be a good thing and I liked the balance exhibited in the movie i.e. the pure love, family ties, friendship and music aspects were presented with equal emphasis. As such, the so-called tragic love story didn't seem that sad after all and the ending was on a relatively high note with lots of hope for the future. I don't know how the drama ended but given that everything was packaged nicely in a 2-hour deal, I do not see the rationale of dragging it beyond 10 episodes so I doubt I'll ever watch the drama version.

Being YUI's debut movie, she did very well especially when it comes to the singing scenes. However, that's really nothing to boast about since she's a professional singer in reality as compared to someone who doesn't sing that well and her CD sales turned out to be really astonishing. You can sense the disbelief I have about that record when I heard news of it.

Anyway, coming back to YUI, she really looked the part of a 16-year-old and didn't get on my nerves for trying too hard to act cute. I have a really low threshold of "kawaii-ness" when people try to show that they are cute on screen so it's good that YUI was natural in that aspect. Her background as a singer does help a lot in bringing out the essence of Amane Kaoru and she looked convincing as a credible street singer. 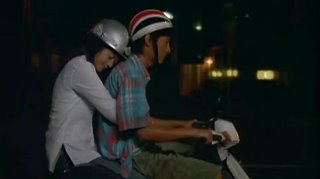 Her partner in this movie, Tsukamoto Takashi didn't get that much attention as Fujishiro Koji but I think he and YUI looked good together and he didn't have to be a hyperactive guy for the first time in a drama or movie. Usually, he plays those mood-maker roles where he tends to speak loudly or be the joke of the party but he has toned down considerably as Koji and I think it's good that he tries more serious roles in future to make sure he can grow as an actor. It just felt a bit weird to see him playing a senior high student when he's far from that age.

Another person worth mentioning was Kishitani Goro who plays Kaoru's dad. It's been some time since I saw him on screen and he entertains me with his bantering with Kaoru in the movie. Then again, he also has to juggle the emotional scenes where he cries upon knowing about Kaoru's deteoriating condition so that's when he shows his skills as an actor. It was a pity that he didn't have too much screentime to do more for the movie.

On the whole, this movie was quite enjoyable to watch and it won't get as tragic as it seems just because of Kaoru's illness. And there's no worry about it being a draggy love story because the pace of how Kaoru and Koji's relationship develops is relatively speedy. You've also got to check out the music which is also an essential ingredient in the success of this film especially the theme song, "Good-bye days" by YUI herself.
Posted by Chiaki at 8:29 PM 1 comment: