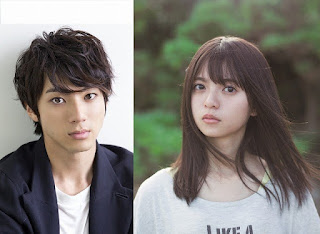 Yamada Yuki and Nogizaka46's Saito Asuka will be starring in the Japanese remake of the 2011 Taiwanese hit movie "You are the apple of my eye" (original title in Chinese: 那些年，我們一起追的女孩) which was based on the semi-autobiographical novel of popular writer Giddens Ko. The original movie achieved 2 million box office visits in Taiwan which amounted to about 10 percent of its population and was the highest-grossing Chinese movie in Hong Kong after breaking the record held by Stephen Chow's "Kung Fu Hustle". The Japanese version titled "Ano koro, kimi wo oikaketa" (I used to chase after you during that time) will be directed by Hasegawa Yasuo and is expected to be screened in cinemas in the autumn of 2018.


Although the original time setting of the novel was in 1994, the Japanese version will be changed to the 2000s. Yamada will play Mizushima Kousuke, a senior high school student who is always playing tricks on others with his group of buddies and the story will describe the love story between him and a good student in his classs named Hayase Mai (Saito) who is appointed by a teacher to keep an eye on him. Despite their vastly different characters, they become drawn to each other over time but their relationship undergoes a series of ups and downs over the next 10 years. Co-stars include Matsumoto Honoka, Sakumoto Takara, Kunishima Naoki, Nakata Keisuke and Yusa Ryosuke.

Yamada commented that when he watched the original movie, he was touched and impressed by the raw emotions of the high school students in the story that he cried for the first time in a long while. Although he is pressurised to be taking on the remake of such a successful movie, he hopes to be able to convey the same type of feelings to the audience in order to make them feel touched. As for Saito who is making her debut in a movie through this film, she commented that she never imagined herself to be playing the heroine in her first movie and pledged to work hard for this film.

Filming started on 27 September is expected to be wrapped up by January 2018.