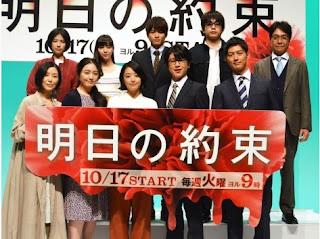 
This original story features Inoue as the 29-year-old lead character Aizawa Hinata who works as a counsellor at Tsubakigaoka Senior High School and aims to be the last adult who the students can depend on other than their parents and teachers. However, while devoting herself to the pyschological care of her students who are struggling with problems in school or at home, she is troubled by her own relationship with her hysterical and emotional mother who intervenes too much into her life. Just then, Hinata gets a confession of love from a male student named Yoshioka Keigo who had been skipping school and was being counselled by her but is shocked to find out on the following day that he died under mysterious circumstances. While trying to find out the truth behind this case, she comes face-to-face with the darkness of human beings and discovers what is most important about living and how a parent-and-child relationship should really be like.

Inoue revealed that as she is playing a counselor, she had become the representative of the cast and staff in "fighting" with the producer after hearing their voices and "complained" that their bento today wasn't that nice and there had been times when they got their scripts too late. Upon hearing this, Oikawa said that Inoue had a manly side to her and would rally everyone with a loud cheer to work hard again after their filming breaks. As for playing the maths teacher Kirishima Naoki who supports Hinata in her investigation like a buddy, Oikawa joked that he was used to playing a buddy because he had acted in the Aibou series before as the buddy to the lead character so he will support Inoue with all his might again this time.

When asked if there was anything they were troubled about recently, Inoue revealed that as there are many fried dishes in the bentos provided, she finds herself eating too much of that because she loves fried food and the side effects are showing up on her face now that she is in her 30s. For example, she had fried chicken and onigiri at 7am once. As such, she hopes to have more vegetables in their bentos so that it will prevent her from taking in too much fried stuff. However, Oikawa revealed that Inoue also eats fried snacks beside the bentos so she admitted that she should exercise some self control on her part as well. Kudo also echoed her view that he is going through a diet and asked for healthy bentos which are also filling. Upon hearing this, she praised Kudo who is nicknamed as Ace that he has a wonderful chest which she discovered while filming a scene when she was resting her head on it and asked him to eat enough to maintain that.

Nakama who plays the mother of Keigo who committed suicide, said that she felt that the actors playing students of the school seemed intimidated by her even though she had not said anything. Inoue then joke that the cast had nicknamed Nakama as "Kawakowa" which means although she looks cute, she is also frightening. Nonetheless, she revealed that everyone gets really excited whenever Nakama is around because there is always a nice fragrance coming from her.