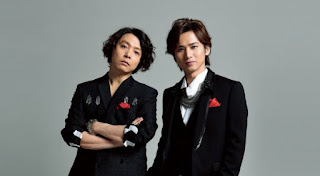 KinKi Kids will be performing together again at the upcoming "TV Asahi Dream Festival 2017" taking place at Saitama Super Arena on 29 October. This will be the duo's first performance together ever since Domoto Tsuyoshi suspended his music activities from June onwards due to sudden hearing loss.


According to insiders, Tsuyoshi was given the all-clear by his doctor in mid September thus leading to the decision to resume his music activities. Tsuyoshi commented that during this period when he had to stop singing, he was encouraged and supported by everyone's kind words and is even more grateful than before for the support he has enjoyed so far. As for returning to the stage after a break of 5 months, Tsuyoshi expressed his joy about being able to sing again. His partner Koichi also echoed this and said that it had been tough for Tsuyoshi to distance himself from his beloved music and wait till his ear got better. Koichi commented that he was glad about the two of them being able to sing together again and is eagerly anticipating the upcoming performance.

Tsuyoshi was hospitalised for sudden hearing loss between 27 June and 4 July and had been undergoing treatment since then. Although he was said to have no problems with his hearing in daily life, his doctor decided that he should not be exposed to loud sounds in the meantime until he had recovered completely. As such, this led to Tsuyoshi skipping a number of scheduled music performances and concerts such as the 20th anniversary concert of KinKi Kids at Yokohama Stadium in July.