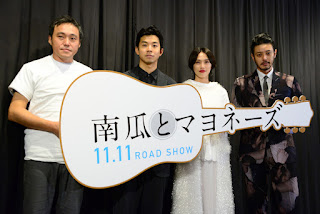 The completion screening event of new movie "Kabocha to Mayonnaise" was held at Shinjuku Musashinokan on 10 october which was attended by the director Tominaga Masanori and cast members Usuda Asami, Taiga and Odagiri Jo. The movie will be screened in cinemas from 11 November.


The story which is based on the manga by Nananan Kiriko, features Usuda as the lead character Tsuchida who works at a cabaret in order to support her live-in boyfriend Seiichi (Taiga) who aspires to be a musician. As a result, Seiichi resolves to change himself and starts working. Just then, Tsuchida reunites with her ex-boyfriend Hagio (Odagiri Jo) who she has yet to forget as she grapples with her old and current feelings for the two men in her life.

Usuda revealed that she got the offer from the director three years ago so the feeling that the movie was finally completed and is ready to be seen by everyone hadn't quite sunk it for her yet. However, she expressed her satisfaction that they had finally reached this point after such a long time.

As it had been 12 years since she last worked with Odagiri, Usuda said that she had realised how charming he is even after all this time. Due to the filming schedule, Usuda's scenes with Taiga were filmed first so she had to prepare herself emotionally for Tsuchida's desire to make things work with Seiichi. However, the moment when Odagiri joined the filming to play Hagio, everyone, be it men or women, was so in awe of his charm that they felt that it was natural for Seiichi to lose out to Hagio. In response, Odagiri said humbly that he didn't do anything fantastic to deserve that praise. On the other hand, Taiga revealed that he had prepared himself to be on bad terms emotionally with Odagiri due to them being rivals in love but the moment he met the latter, he was already won over by Odagiri's charm. Upon hearing this, Odagiri said that he probably needs to treat everyone to a meal in return for their overwhelming praises.