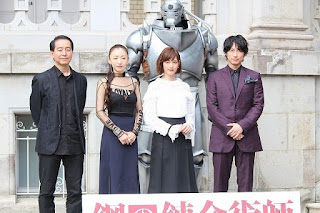 The completion press conference of new movie "Hagane no Renkin Jutsushi" was held at Tsunamachi Mitsui Club on 3 October which was attended by the director Sori Fumihiko and cast members Yamada Ryosuke, Honda Tsubasa, Dean Fujioka and Matsuyuki Yasuko. The movie will be released in cinemas from 1 December after it is shown as the opening film of the 30th Tokyo International Film Festival on 25 October. The date of the press conference was specially chosen as such to coincide with the date when Edward and Alphonse left for their trip to find Kenja no Ishi in the original manga.


Yamada who plays Edward in the movie, revealed that he had dyed his hair for the purpose of this press conference and show his deep feelings for this movie which he described as a film of such scale hardly seen in the Japanese movie scene. He commented when he watches his own work, he tends to find fault with himself but in the case of this movie, he was too engrossed with the film that he forgot to do so. Yamada went on to describe the feelings he got from watching this movie was as strong as when he watched "Harry Potter" for the first time and that everyone should come to watch this which will make them realise that Japan is also capable of creating something this good. However, he also had his reservations whether he could play this role well especially since he is a fan of the original manga. Nonetheless, he tried his best to show respect for the original manga and hoped that fans will like what they see. With regard to his co-star Honda, Yamada "complained" that she teased him during the filming by remarking that he seemed to have "shrunk" in height and insinuating that he had gotten shorter. In response, Honda said that since they play childhood friends in the movie, that was why they could joke like that during the filming.

As for Fujioka who plays the Flame Alchemist Roy Mustang, he commented that this was the first time that he played a military personnel so he tried to learn how to walk, salute and talk like a soldier after seeking advice from a former Self Defense Forces member. He also revealed that he had put on weight for the role so as to look close to his character.

As for Matsuyuki who plays one of the homunculi characters Lust, she joked that this is the first time she had played someone so evil and it was rare to do a character like this. As such, she wanted to challenge herself as to how frightening she could be by realising her dream of playing a baddie in a fantasy movie.