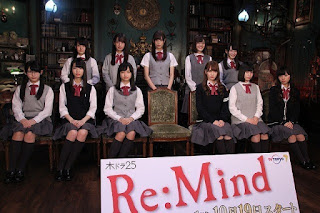 The production press conference of TV Tokyo Autumn 2017 drama "Re:Mind" was held on 8 October which was attended by the leads i.e. the 11 members from Hiragana Keyakizaka46 namely Iguchi Mao, Ushio Sarina, Kakizaki Memi, Kageyama Yuuka, Kato Shiho, Saito Kyoko, Sasaki Kumi, Sasaki Mirei, Takase Mana, Takamoto Ayaka and Higashimura Mei.
Leader Nagahama Neru was supposed to participate in this drama as well but due to her busy schedule as the leader of Keyakizaka46  as well and in consideration of her health, it was decided in September that she would concentrate on her activities in Keyakizaka46 and not act in this. The drama will begin its run from 19 October in the Thursdays 1am timeslot and also be shown via Netflix from 13 October where new episodes are uploaded on every Friday while BS Japan will show this from 24 October in the Tuesdays 11pm timeslot.

The story which is conceptualised by Akimoto Yasushi, is a suspense tale set in a senior school where the classmates are trapped in a certain place before they realise it. When they regain consciousness, they find that they are seated around a huge table and are greeted with some strange happenings. Since there is a reason why the girls cannot escape from the room, they are plunged into fear and confusion and try to make sense of what has happened as they try to escape amid various horrifying things heading their way.

Kato revealed that the members had spoken to Nagahama once when it was known that she would not be acting in this drama and she encouraged them to work hard for the filming. As such, everyone will try their best in this drama which marks their acting debut even though they are nervous and worried about their performance. Sasaki Kumi commented that the level of awareness with regard to their group is still low but they will cherish each opportunity given to them and work hard for the filming together.