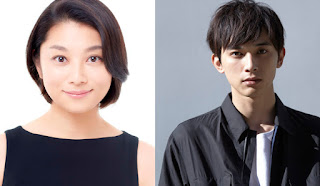 Koike Eiko and Yoshizawa Ryo will be starring in the new MBS / TBS drama "Koisuru Hong Kong" (Hong Kong in love" which consists of 4 episodes and will begin its run from 8th (Sundays 12.50am) and 10th Oct (Tuesdays 1.28am). The story set in the autumn of 2017 describes how 5 men and women with their own problems gather in the bustling city of Hong Kong where they get embroiled into a unexpected incident. Filming was done entirely in Hong Kong during the end of September.


The story begins with the crew of a documentary filming in Hong Kong with a Japanese celebrity named Eri played by Mogami Moga, the director Yamada Kenta (Yoshizawa) and the assistant director Hirakawa Aya (Baba Fumika). However, while in the midst of filming, Eri is abducted by a local named Daniel (Nagata Kaoru) in front of her staff members and a stranger Imoto Maki (Koike) who is in Hong Kong for a holiday and to meet a guy she met through a matchmaking website. Actually, the abduction is due to Maki using Eri's photo as her profile icon because she lacks confidence in her looks so Daniel misunderstands that Eri is the woman he has been interacting with all along on the website. The five of them who seemingly have no links to one another are then embroiled in this incident which leads to an unexpected ending. Other co-stars include Iwamatsu Ryo who plays Katagiri Nari, Japanese broker and knows everything about the local underworld scene and Yanagishita Tomo from D-BOYS who plays Akutsu, a TV producer who is Yamada's senior.

With regard to being able to film this drama in Hong Kong, Koike revealed that she was very excited about it while Yoshizawa felt the same since this was the first time he got to go overseas for filming. Koike commented that her impression of Hong Kong is that it is a dynamic and energetic city and was also happy to be working with Yoshizawa for the first time. Despite being younger than her, she felt that he was always around to take the lead during the filming just like in the story. As for Yoshizawa, he said that although it was a very tight schedule, they got some really great footage on Hong Kong's streets and hope that everyone will enjoy this drama.