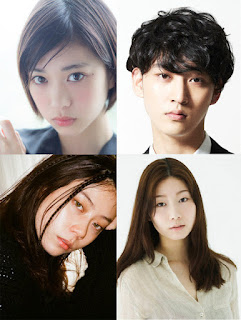 The supporting cast line-up of new movie "River's Edge" starring Nikaidou Fumi and Yoshizawa Ryo had been announced. The movie is based on the same-titled manga by Okazaki Kyoko and directed by Yukisada Isao. Nikaidou plays the lead character Wakagusa Haruna, a senior high school student while Yoshizawa plays Yamada Ichiro who attends the same school as Haruna and is bullied by her ex-boyfriend Kannonzaki for being a gay. After saving Ichiro from the bullying, he reveals to Haruna that he and Yoshikawa Kozue, Haruna's junior, a student model suffering from eating disorders, had discovered a dead body on the river bed. At the same time, Haruna's friend Rumi is pregnant but doesn't know who the father is while Yamada's friend Tajima Kanna is in love with him even though he doesn't feel the same way. Just then, another dead body appears.


Morikawa Aoi will be playing Tajima Kanna who is obsessed with Yamada while Uesugi will be playing Kannonzaki who keeps bullying Yamada and is Haruna's ex-boyfriend. Doi Shiori will be playing Rumi who is pregnant but doesn't know who the father of her baby is. Asano Tadanobu and Chara's daughter SUMIRE will play Yoshikawa Kozue, a model who is suffering from an eating disorder.

Morikawa recounted that she felt as if she was in a dark spiral whenever she headed to the set which reflected the atmosphere of the story created by the cast. However, this is a spiral not unique to the characters in this story as anyone who had been young before may probably have gone through something like this. As such, she expressed anticipation at the movie's release and hoped to see this movie making an impact on everyone. On the other hand, Uesugi said that it had been a very wonderful filming period when they got to live their youth to the fullest every day. Although Kannozaki resorts to violence in order to feel alive, Uesugi felt that his character was just lonely and couldn't accept anything into his heart and just vented out his feelings.

SUMIRE revealed that she was nervous on the set because she was shy and had little experience as an actress. Thankfully, she was surrounded by co-stars who are about the same age as her so she felt comfortable in this environment. With regard to her character Kozue, SUMIRE said that although Kozue looked like a dark person, she is someone who is clear about her likes and dislikes. The fact that Kozue was a model also helped SUMIRE to immerse herself in the role as she could identify with how Kozue felt. Doi remarked that the filming period had been a battlefield for them and playing Rumi was a very memorable experience for her as she eagerly anticipates the release of the movie.

The movie will be shown in cinemas in February next year.