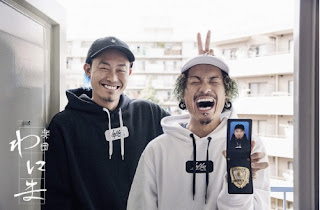 3-member rock band WANIMA will be singing the theme song for FujiTV Autumn 2017 drama "Keiji Yugami" starring Asano Tadanobu and Kamiki Ryuunosuke which begins its run from 12 October. The song titled "Human" (release date undecided) is the band's first theme song for a drama. The lyrics were written by its vocalist KENTA in August after he read the script while the melody was composed by all the members. WANIMA commented that they are very happy to be given the chance to sing their first theme song and hopes that many people can hear this song which reflects the tough reality of pursuing the truth in this world.

WANIMA was formed in 2010 by KENTA and guitarist KO-SHIN before their drummer FUJI joined them in 2012. They made their debut in October 2014 and had sung CM songs for au and Nivea. The band held their solo concert in Saitama Super Arena in March this year which was attended by 20,000 people.