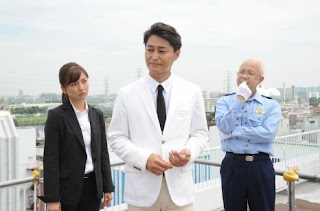 Yasuda Ken will be starring in the new TV Asahi drama SP "Shiroi Keiji" (The white police detective) which will be shown at 10am on 27 October. He will be wearing a white suit throughout the entire drama which coincides with the title of the drama.


Yasuda plays the lead character Sagara Shuhei who used to be a lawyer nicknamed as the enemy of the police for getting many of his clients off the hook. However, due to an incident, he quit being a lawyer and switched to become a police detective who aims to clear the names of those wrongly blamed for crimes which they did not commit. He then reunites with his past client Tanaka Saori (Nakayama Shinobu) who had her name cleared by Sagara a year ago but is now implicated in another crime as the suspect. As the story develops to show whether Tanaka is guilty or innocent, the process of how Sagara came to become a police detective despite his unusual background will also be revealed.

Yasuda said that he is extremely thankful to be given the chance to play the lead character at his age and it is even more memorable because this is his first appearance in a 2-hour mystery drama SP. As such, there were a lot of fresh experiences for him this time. With regard to his character's image colour of white, he said that he was reminded of the snow in his hometown i.e. Hokkaido which brings to mind a clean image. That being said, he thought that the grey side of people is probably what makes them attractive.

Co-stars include Mano Erina who plays Sagara's partner at work Shibutani Misato and Kosakai Kazuki who plays Higashiya Shinichiro, the police station chief who hires Sagara. Actually, Mano had worked with Yasuda before in the 2013 TV Tokyo drama "Minna! Esupa dayo!" where they played father and daughter. As such, Yasuda commented that he was happy to see how Mano had grown as an actress and grateful that they could work together again. As for Kosakai, this is the first time he is working together with Yasuda.