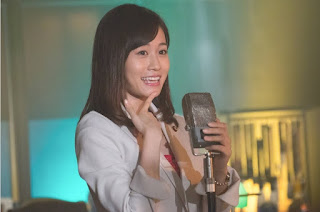 Maeda Atsuko will be starring in the spin-off drama from FujiTV Autumn 2017 drama "Minshuu no Teki ~ Yo no naka okashikunai desuka!? ~" which will begin its run from 23 October in the Mondays 9pm timeslot. The spin-off drama "Kataomoi no Teki" (The enemy of one-sided love) consists of 5 episodes and will be shown according to the following schedule and be made available for streaming via FOD after all episodes have been shown on TV:

Maeda plays the role of Koide Mia who used to be a former gravure idol and is a newly-elected city councilor in the main drama. In the spin-off, Mia's past as an idol and her past relationships will be featured so she will singing and dancing in the scenes of her idol days. Maeda commented that Mia is a character who has a hidden past and interesting side unknown to others so she said that she had enjoyed acting in the spin-off drama which was interesting for her to explore the various possibilities imaginable in Mia's past. As for the singing and dancing scenes, she thought that she couldn't handle the choreography as she was having a hard time memorising the lines in the script but it came to her naturally during the filming so she was glad that she could still dance like that.

The story starts off from Mia's days as a senior high school student when she used to be secretly in love with a boy also in senior high school who she met along the way to school. However, when the boy mocked her for having legs as thick as his waist, she began a strict diet to lose weight and succeeded in shedding 25kg in one year. With her new appearance, Mia became a gravure idol and was featured prominently on TV and magazine covers. However, as she neared her mid 20s, she was easily overtaken by her peers who were much younger and decided to quit because she sensed that she wouldn't be able to continue her career any longer. Due to the introduction of her student at her diet seminar who happened to be Inuzaki Kazuhisa (Furuta Arata), a powerful politician, she decides to stand for election in the city council. Her co-stars from the main drama i.e. Saito Tsukasa and Ito Sairi will also be appearing in the spin-off drama.