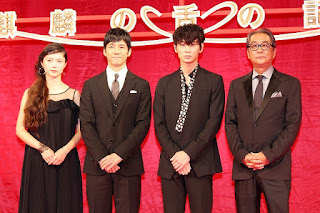 The completion press conference of new movie "Last Recipe Kirin no shita no kioku" was held at Tokyo International Forum on 25 September which was attended by the director Takita Yojiro and cast members Ninomiya Kazunari, Nishijima Hidetoshi, Ayano Go, Miyazaki Aoi and Nishihata Daigo. The movie will be shown in cinemas from 3 November.

The movie is based on the novel "Kirin no shita wo motsu otoko" (The man who has the kirin's tongue) by Tanaka Keiichi who is the director of FujiTV's cooking variety show "Ryori no Tetsujin". The story is set in Manchuria during the 1930s and Japan during the 2000s where there are two men reputed to have the kirin's tongue i.e. someone with the perfect sense of taste who can recreate dishes by tasting them just once. Ninomiya plays the role of Sasaki Mitsuru who lives in the current era where he charges an exorbitant amount to recreate dishes for people who wants to eat something for the last time in their lives. In the Manchuria part of the story, Nishijima takes on the role of Yamagata Naotaro who also has the kirin's tongue while his wife Chizuru is played by Miyazaki. Takenouchi Yutaka plays Miyake Taizo, an army colonel who orders Naotaro to create the best full course meal for him which consists of 112 dishes. During the war, the recipes go missing. To recreate these legendary dishes, Mitsuru is engaged for the task so the movie will shuttle between the past and present repeatedly. In the current era, Mitsuru's buddy Yanagisawa Ken will be played by Ayano.

As this is the first collaboration between Ninomiya and Takita whose film "Okuribito" won an Oscar in the 81st Academy Awards' Best Foreign Language Film category, Ninomiya was asked if he had any ambition about winning a foreign movie award through this movie. He commented that he would like as many people to watch this movie but expressed his wish to win a Michelin star rather than an Oscar. Upon hearing this, Ayano replied excitedly that this was a good idea since no movie had won a Michelin star before. Ninomiya then explained that the food in this movie were filmed in such a beautiful and charming way so it would be good to aim for something which nobody has achieved before. He also revealed that Ayano and he could get off work early every day during the filming which allowed them to prepare for the next day and he learned a lot from the director in terms of filming techniques and time management.

When asked to reflect on the filming, Ninomiya revealed that the scenes he had with Ayano will make the viewers relax since they were behaving as what they usually do in private i.e. they are close friends who meet up for drinks at times. Ayano echoed his view that his time spent with Ninomiya so far will show up very clearly through these scenes which didn't require them to pretend to be close. The director Takita said that the two actors managed to show the close ties between their characters which goes beyond brotherhood.

As for Nishijima, he revealed that in order to prepare for the filming, he was practising how to make fried rice but in the end, he didn't get to show off the results of his training. Instead, it was Ayano who got to cook fried rice many times on screen. With regard to his character in the 1930s, he commented that the story of how like-minded people clashed while trying to head towards the same goal reminded him of his youthful days but the realisation of having to make sacrifices in order to achieve something would usually mean the end of youth as people grow up and find out about this the hard way.

When asked by the reporters what kind of special power they would like to have, Ninomiya said that he wanted the power to fly since it would be cool to do so when he is singing and dancing on stage. At present, he has to rely on the staff members and wires to fly so he hopes to do it himself. As for Ayano, he hopes to learn all the languages in the world so that he can communicate with everyone. Upon hearing this, Ninomiya immediately changed his answer to say that he wants the same. When it was Nishijima's turn, he wants to be able to see the future but is also worried about being demoralised by this since his character in the movie had a very tragic fate ahead of him. As for Miyazaki, she hopes to be able to dance since she can't do it while Nishihata said that he wants to become muscular and be able to move around in a flash since it took him 2.5 hours to get from Osaka to Tokyo via the Shinkansen.