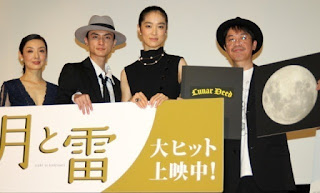 The first-day-screening event of new movie "Tsuki to Kaminari" was held at Theatre Shinjuku on 7 October which was attended by the director Ando Hiroshi and cast members Hatsune Eriko, Koura Kengo and Kusakari Tamiyo. The film which is based on the same-titled novel by Kakuta Mitsuyo, features Hatsune as the lead character Yasuko who had lived with her late father's lover Naoko (Kusakari) and her son Satoshi (Koura) when she was a child. Years later when Yasuko and Satoshi have become adults, they reunite which changes her ordinary and peaceful life drastically.

As for Kusakari whose character Naoko always appears with a dirty and rough image, she deliberately dressed up for the first-day-screening event and said that she wanted to show everyone that this is actually how she looks like usually. This led the audience to laugh at her comment.

I was wondering where can I watch this online. I've searched high and low on this movie - not even a review (except yours) has been discussed :((((