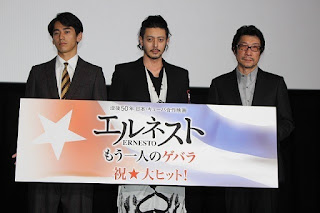 The first-day-screening event of new movie "Ernesto" was held at TOHO Cinemas Shinjuku on 7 October which was attended by the director Sakamoto Junji and cast members Odagiri Jo and Nagayama Kento. The movie which was released a day earlier, consists of the Cuba and Hiroshima arcs and features Odagiri as the Bolivian-Japanese doctor Ernesto Freddy Maemura who fought alongside with revolutionist Che Guevara and died at the young age of 25.


Sakamoto thanked the audience for coming to watch the movie and said that he also had to thank the late Takakura Ken for asking him to write a script on the themes of countries, nationalities and race back in 2013. This led to Sakamoto coming up with the idea of doing something on Japanese immigrants and through his research, he came to know about Freddy Maemura. If not for Takakura's words, he would never have done the research and would not be able to make this movie.

Odagiri also revealed that he received some very encouraging praises from a senior actor who expressed his joy to see that Odagiri had taken on this challenge and hoped that he could continue to take on such works and lead the way for the rest. Odagiri said that he was also very happy to be able to take on such a meaningful movie.

As Freddy Maemura had given his life to become a revolutionist at the age of 25, Odagiri was asked about what he was doing at 25. He recalled that he was filming the movie "Akarui Mirai" directed by Kurosawa Kiyoshi which was his first leading role in a movie so he was desperate to do well. Especially since his co-stars were big names like Asano Tadanobu and Fujii Tatsuya, he felt that if this movie flopped, he might never have another chance again. Odagiri said that he aspired to be like his favourite actor Steve Buscemi who worked repeatedly with directors determined about what they wanted to do so he had devoted himself so much to that movie until Kurosawa told him not to work so hard.

Odagiri then described "Ernesto" as a landmark in his career to date and is a rare type of film in the Japanese movie industry. Even though not many people would want to participate in such a project, he was aware of the risks involved in this challenging movie. As such, he called upon everyone to support such a movie so that this type of films would not die out in future and that they could make such films again in future. Nagayama echoed Odagiri's view and said that he hoped that the audience will spread the word so that more people will be encouraged to watch this movie.