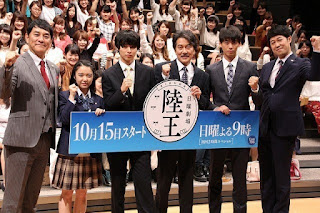 
The drama which is based on the same-titled novel by Ikeido Jun, features Yakusho as the lead character Miyazawa Koichi who is the 4th generation president of Japanese socks manufacturer Kobaseya based in Gyoda City, Saitama Prefecture, which has been in business for more than 100 years. With the decline in demand for its products, the small company which has only 20 employees, strives to rejuvenate its business by entering the field of producing running shoes which feel as if you are barefooted. However, as the industry is very competitive and the company does not have sufficient funds, Kobaseya is faced with various challenges along its journey but Miyazawa strives on with the help of the people around him as they take on the bigwigs.

Although it had been 20 years since Yakusho last acted in a TBS drama since "Otona no Otoko", he said that it has been a very enjoyable filming process so far as he is surrounded by very charismatic staff members and co-stars which offer him a lot of stimulation and inspiration. He hopes that everyone will watch this drama which will show whether Kobaseya rises above the odds to achieve success while surrounded by its allies and enemies and that it will make the weekend very interesting for the viewers.

Yamazaki who plays Yakusho's son in the drama, commented shyly that although his character Daichi keeps arguing with his father Koichi in the story, Yakusho is very nice and gentle towards him and said that "Rikuou" has a very good story and is happy to be a part of this drama.

Takeuchi who plays a professional long-distance runner Mogi Hiroto, said that the story is bound to make everyone feel touched so he didn't want to talk too much about it in case it made him cry. He also pledged to work hard till the end so as to convey the essence of this story to the fullest. Kamishiraishi who plays Yakusho's daughter in the drama, also echoed Takeuchi's view that just watching the first episode is bound to make people cry and she can't wait to see the later episodes. She also complimented Yakusho who creates a very warm and cordial atmosphere on the set and expressed her respect for him.

Taki and Koyabu who play the sales director and his subordinate from a rival sportswear company Atlantis, already make their presence felt in the first episode with their evil antics. Taki "pledged" that he will go all out to destroy Kobaseya while Koyabu said that although he has started to get used to the filming, he is getting worried about the viewers' response towards his performance after watching the drama.