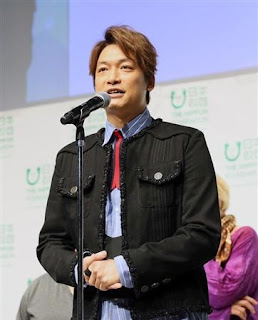 Katori Shingo appeared at the presentation event for the Nippon Zaidan DIVERSITY IN THE ARTS Project Exhibition as an artist at Spiral on 13 October which marked his first public appearance since he left Johnny's Jimusho on 8 September. Two of his works will be displayed at this exhibition which is meant to support the arts and cultural works by those with disabilities. Katori had helped the foundation draw a wall painting as part of SMAP's activities to support the 2020 Paralympic Games so he was invited to take part in this exhibition.


When it was his turn to speak, Katori introduced himself as an artist with a smile and admitted that he was both happy and shy about being introduced as such in front of everyone. Katori hopes that there will be as many people as possible who can come to see his works titled "Isoge mada maniau" (If you hurry, you can still make it) and "Hi no tori" (Fire Bird). He also explained that he gave his works their titles after they had been completed. "Isogeba mada maniau" was completed in 2010 and describes a couple becoming bones without a future and how he was trying to tell them that they could still make it with the aeroplane in the middle of the picture. As for "Hi no tori", it was completed in 2014 when he was so bogged down with work. The exhibition will run till 31 October so he called upon everyone to come here multiple times as he will be here on multiple days as well to shake hands with them. At the end of the event, Katori was asked about how his past month had been after leaving his old agency. In response, Katori said that he was very happy as he had begun doing new things. When asked about the likelihood of becoming the Paralympics' official supporters again, Katori paused for a moment before saying that he hoped to be able to help in this manner again i.e.through his art works and thanked them for their concern.

The media also interviewed Katori's current manager Iijima Michi who used to be SMAP's manager when they were still in Johnny's Jimusho. With regard to the relationship between the three former SMAP members i.e. Inagaki Goro, Kusanagi Tsuyoshi and Katori who are now under the company CULEN managed by Iijima, she described them as business partners who are engaging in creative activities together. With regard to Katori's future activities as an artist, she said that he will continue doing these as well as develop his career in showbiz.