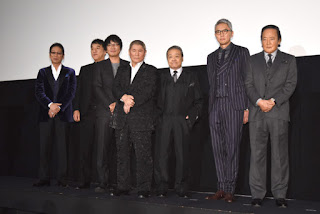 The first-day-screening event of new movie "Outrage Saishusho" was held at Shinjuku Picadilly on 7 October which was attended by the director cum lead actor Kitano Takeshi and cast members Nishida Toshiyuki, Oomori Nao, Pierre Taki, Matsushige Yutaka and Kaneda Tokio. Upon getting onto the stage, Nishida joked that today was the sales promotion event for the novel "Analogue" written by Kitano which made everyone laugh. In line with the movie's theme of who is the last survivor in the underworld battle, the cast were asked about their tactics of surviving as an actor. Nishida then joked to say that as long as they followed the direction of the wind i.e. the trend, they should be able to ensure their survival in this industry.


Matsushige who also appeared in the previous installment of the "Outrage" series, revealed that the cast members were all very reluctant to "die" in the story because they knew that they couldn't appear again if their characters died. In the previous movie, Kiritani Kenta and Arai Hirofumi both had dying scenes and kept saying that they didn't want to "die". As such, Matsushige said that the movie is indeed a story where the men are betting on their survival with their lives and expressed his pride about being able to survive in the "Outrage" world. However, as he was the only good guy i.e. a civil servant compared to the others who played yakuza members, he often wondered if he was sticking out like a sore thumb.

Oomori said that Kitano had done very well in describing the yakuza world in such a detailed manner and made the movie into one boasting of an all-star cast in Japan. He revealed that Kitano would try to drive them to the edge by saying things like if someone was not chosen to be part of the cast, he was not recognised as one of the best and even joked about giving veteran actor Nakadai Tatsuya just 500 yen for transportation expenses.

Oosugi who marked his 10th appearance in a Kitano work through this movie, said that he was filled with emotions about returning to work with the latter and revealed that the filming was full of tension. As for Taki, he said that he played a perverted yakuza member and joked that he had to make sure that he didn't let his true self show in his acting. Last but not least, Kaneda who is actually a entrepreneur by profession, said that he had put in his best for this movie and it was a memorable experience to be able to attend this event with everyone.