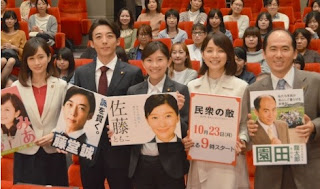 The production press conference and fan meeting of FujiTV Autumn 2017 drama "Minshuu no Teki ~ Yo no naka, okashikunai desuka!?" was held on 13 October which was attended by cast members Shinohara Ryoko, Takahashi Issei, Ishida Yuriko, Maeda Atsuko and Saito Tsukasa. The drama will begin its run from 23 October in the Mondays 9pm timeslot after its start date was postponed from 16 October due to the upcoming general elections on 22 October.


Shinohara admitted that when she first got the offer to act in this drama, she was feeling rather stressed about it especially with the current political climate but the enthusiasm and passion from the staff convinced her to take on this challenge. As such, she said that they would be trying to steer this drama towards success with confidence in themselves.

During the event, Takahashi was asked by the host if he would be doing any heart-throbbing scenes in the drama i.e. romance-related scenes to which Saito joked that there are many of such scenes to look out for. However, the actresses were bewildered by this remark and asked what he meant since they did not know of any such scenes. In response, Saito revealed that he was referring to the kabe-don scenes but it wouldn't be a man forcing a woman into a corner by slamming his hand on the wall and rather it was one person slamming the wall in anger (both actions are referred to as kabe-don in Japanese but with different meanings). Takahashi apologised for lying about this while Saito said that he was nervous about going along with this joke and teased Takahashi for being a sexy guy who makes women's hearts race. Shinohara commented that Takahashi's eyes are the most powerful in doing that. When asked by a member of the audience if there will be any romance scenes in this drama about politics, Takahashi then went around the bush to suggest that there may be some coming up since there are bound to be emotions between people but he wouldn't go into any details so as not to let the cat out of the bag.

The cast also took turns to reveal little-known facts about Takahashi. For example, Shinohara exclaimed how she was surprised to find out that Takahashi loves desserts so much that he eats a lot of chocolate and pancakes despite his cool image. As such, Shinohara wondered if he was taking in so much sweet food because he was tired from his busy schedule but Takahashi admitted that he also eats sweet things when he is energetic and he does this every day without fail. Maeda followed up by revealing how Takahashi has his own way of maintaining his health such as eating one meal a day and exercising when he's hungry which led Saito to comment that it was better to talk to Takahashi about healthy living as compared to reading "Tarzan" (a men's magazine with a health theme). Shinohara then chipped in to say that Takahashi is knowledgeable about so many things under the sun such as trends and foreign affairs which made it so enjoyable to be chatting with him. Upon hearing all these compliments, Takahashi wondered if his co-stars had arranged to talk about these beforehand and shy about being praised like this. He revealed that he has some sports equipment like a spin bicycle at home which he uses for muscle training and aerobic exercises on a regular basis.

Ishida was asked about her beauty secrets to which Shinohara praised her for looking very beautiful. Ishida revealed that she doesn't do anything special other than paying attention to hydration and doing pilates. Besides, she used to be a competitive swimmer so she naturally had some muscles which made her figure look slim and toned. Although it had been 13 years since she last acted in a Getsuku drama (the last one was 2004's Pride), Ishida said that she is very happy about being able to work together this time with Shinohara who has a very acting style from hers.