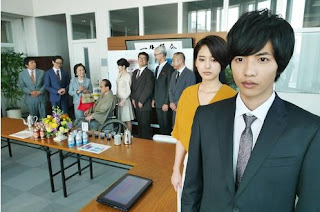 Shison will be the lead character Tomita Keisuke in this story titled "SON-TAKU" which means conjecture. Tomita works as a newbie employee in a beverage manufacturing company and is told to take part in the presentation for a new beverage to be launched for the company's 25th anniversary along with his senior Yamaguchi Maki (Yamazaki Hirona). During the meeting, it is then revealed that Tomita is actually an alien named Tommy R2X who has been sent to Earth to investigate the communication methods used by human beings. As Maki is gradually forced into a corner, thanks to the meeting which has headed into an unimaginable state due to a series of unpredictable happenings, Tommy R2X can't help but lend a helping hand to her which also helps him to develop his own conjectures towards the end of the story.

As this is the first time that Shison is playing an alien, he revealed that he tried to keep himself as emotionless and expressionless as possible while different thoughts were supposed to be going on in his mind. As such, he hopes to be able to show the gap between these two aspects through his acting. Especially since he had been a fan of the series since he was a child, he was very happy to be able to act in this and even more thrilled to be taking on the leading role.

Sources: Nikkansports / Oricon
Posted by Chiaki at 11:25 AM