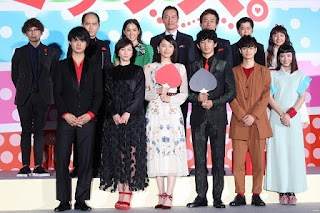 The completion screening event of new movie "Mix" was held at Roppongi Hills Arena on 20 September which was attended by the director Ishikawa Junichi and cast members Aragaki Yui, Eita, Hirosue Ryoko, Seto Koji, Nagano Mei, Sano Hayato, Morisaki Hiroyuki, Nakamura An, Suzuki Fuku, Tani Kanon, Endo Kenichi, Tanaka Misako and Saito Tsukasa. The movie will be shown in cinemas from 21 October and describes how the heroine (Aragaki) used to be a genius at table tennis when she was a child but suffers setbacks in love and her career as an OL. In order to resurrect the table tennis club owned by her late mother, she forms a mixed doubles team with a former boxer (Eita) to take part in the All Japan table tennis tournament and get back at her ex-boyfriend (Seto) and his girlfriend (Nagano).

At the red carpet event attended by about 1,000 people, the cast members spent about 30 minutes shaking hands with the fans and threw specially-made ping pong balls to them. During the main event, Eita revealed that there will be a scene in the movie which is likely to make him the top enemy of Aragaki's male fans nationwide and joked that he was prepared for the aftermath. Just then, a male fan started cheering loudly which led Eita to exclaim that he was startled and his reaction made the audience laugh. Hirosue then chipped in to say that just watching Aragaki's cuteness and Eita's "unexpected" coolness in this movie will be worth the trip to watch this movie in the cinema. Eita followed up by saying that this will be a movie which will make everyone feel refreshed and happy at the end while Aragaki said that this is a movie which she really liked.

As Eita and Aragaki had many scenes together, they spent a lot of time together but actually spent their breaks in silence most of the time unless Eita was bombarding her with various questions. Aragaki revealed that there was once when she was asked if her heart was still beating which made her feel bewildered but she still replied to him in the affirmative.

As for the scenes where Aragaki's character had to take part in the All-Japan table tennis championships' Kanagawa Prefecture prelims, the cast were impressed by how hard she played during those 4 days of the competition. Hirosue commented that Aragaki must have felt very tired and got muscle aches from the filming while Endo praised her for working so hard. In response, Aragaki said that as time went on, she was hanging on with her perseverance and was so engrossed in the playing. She also expressed thanks to everyone for supporting her through those tough days.

In the movie, Hirosue and Sano play mixed doubles partners. Sano revealed that his father is a big fan of Hirosue and was so jealous when he heard that Hirosue had made a bento for him as he was trying to lose weight for the filming. He even ordered Sano to bring the bento back to his hometown in Aichi instead of eating it which led everyone to laugh upon hearing it. On the other hand, Hirosue was quite conscious of the age gap between her and Sano especially when he was getting better at table tennis faster than her. However, when she heard about the actual age gap between them, Hirosue was so shocked that she tried her best not to look like mother-and-son when she was with Sano.

Endo who plays the owner of a mini tomato farm and teams up with his wife Mika played by Tanaka Misako, expressed how he was very impressed with his co-star who would be so engrossed talking on her smartphone and wasn't looking at her script during the breaks. When it was time for filming, she would then ask him what scene they were filming. This led Tanaka to "protest" that it made her look bad but Endo explained that he was praising her for being able to switch between her on and off modes so easily when acting which was a reflection of her high level of concentration.