The following is a selection of Top 10 most anticipated young actresses as selected by Oricon style users:

The following is the summer 2008 drama expectation ranking from Oricon before the start of the season where respondents choose the drama which they are most looking forward to:

The following are some information regarding the original Korean version of Maou:

When Homicide Detective Kang Oh Soo hit a dead end in his investigation of two seemly unrelated murders, except for the Tarot cards left behind at both crime scenes, he sought help from Seo Hae In, a woman with psychometry ability. She revealed that the killers were different in each murder, but the victims were chosen for their connection to a death of a high school boy. Later, the cases proved to have one more thing in common: the suspects have the same defense attorney, Oh Seung Ha.

Seung Ha's defense for his clients severely shaken Oh Soo’s conviction to catch the Tarot Card mastermind. Oh Soo was reminded that years ago he had killed a high school classmate in a fight. He was acquitted of all charges and began his life anew. Now, someone has came back to revenge the boy’s wrongful death by killing those who got him off.

The above information is from DramaWiki.

The Japanese-release DVD set comes in two parts and can be found here.
Posted by Chiaki at 7:35 AM No comments: 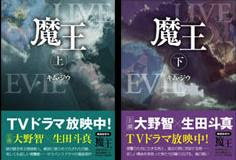 The novel version of Maou translated from its Korean original is released now! Includes an explanation of key Tarot cards and Faust (the theatrical play) featured in the story. 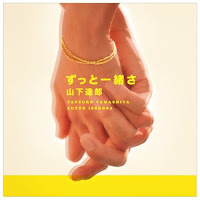 dakishimete
shijima no naka de
anata no koe wo kikasete

10) Hyakuen to Nigamushionna
Posted by Chiaki at 7:55 PM No comments: 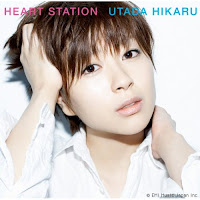 1)Takenouchi Yutaka and Kanno Miho
Both of them are my favourites and this combination is quite refreshing. Especially for Takenouchi who has not been in a full-length drama for some time, it is extremely exciting to see him back in action. Based on what I've seen from the first two episodes, their acting seems to have improved significantly and I look forward to more sparks between them as the story progresses.

2) The storyline
I like stories which reflect reality. Although there have been many medical-themed dramas, you can have various perspectives to the same topic. In this case, instead of seeing a heroic-type of doctor like what we've seen in Iryuu, this drama focuses on the harsh reality of maintaining the financial feasibility of the medical institution vs. the idealistic approach of providing medical care to all who need it. On one hand, we have Kanno's character, Aiko fighting to keep the bankrupt town hospital accessible to the locals but Endo (Ogawa Tamaki) wants to transform it into a celebrity hospital where medical care is only offered to those who can afford it. Takenouchi's character, Moriyama has a hidden past and is caught between his beliefs and what reality requires.
Posted by Chiaki at 6:21 AM No comments: 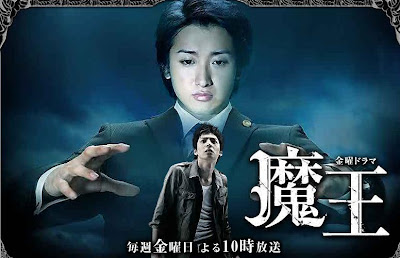 I will be posting previews of new dramas only for those which I'm interested in so you won't be seeing introductions for all offerings within each season. To start off, here's a feature of Maou from TBS!

1) Ohno Satoshi's first leading role in a drama
All along, Ohno has been known as the underrated actor in Arashi who's been praised for his acting in stage plays. However, he has never acted in a drama before. This is the first time he's acting in a drama and to top it off, it's a leading role! His character, Naruse Ryo is an angel on the surface but a devil deep within. As such, this will be a test of his acting skills and may determine whether he can secure more drama appearances in future.

2) Ohno and Ikuta Toma acting together
In the drama, Ohno and Ikuta's roles are rivals while in real life, they are buddies who have known each other for years. It will be interesting to see how they face off through acting.

3) The suspense
I've always like suspense thrillers so this seems to be an enjoyable drama to sit through. Although we are presented with the reason why Ryo wants to take revenge against Naoto right in the first episode, the thrilling part is how Ryo manages to execute his plan without dirtying his hands and breaking the law. Thus, the issue here is not finding who's the culprit behind all these events but rather guessing what will happen next and how it will end.
Posted by Chiaki at 6:16 AM No comments:

With the final broadcast of CHANGE last night, this concludes the spring 2008 season. As such, here's the ratings ranking of the season in terms of average rating throughout these 3 months:

*Note that Hachi-one Diver will be showing its last episode this Saturday thus was excluded in this ranking. 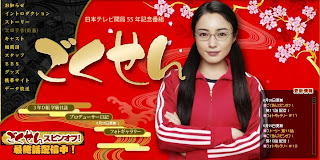 The number 1 spot belongs to Gokusen from NTV which has an average rating of 22.81%. Out of its 11 episodes, only the 9th and 10th episode went below the 20% mark thus propelling it to top spot ahead of CHANGE which scored 3.8% higher for its finale last night.

I had no interest in this drama at all thus didn't even watch a single episode. I guess the novelty of the series had already worn off by the time I finished the first series and that I'm rather sick of such nekketsu-kyoshi type of stories by now. Besides, the so-called ikemen in this latest instalment fail to interest me...maybe it's age which has changed my tastes. And I've never liked yanki-type of guys. ^__^ 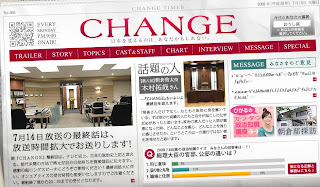 At No.2 is CHANGE which got an average of 22.08%. Well, it only lost to Gokusen by a mere 0.73% despite the fact that it had 4 out of 10 episodes going below 20%. The drama lost to Gokusen for its first O.A. but managed to deal a retalliating blow through the finale.

Well, this was one of the two dramas which I finished in full for this season. I'm neither a fan of Kimutaku nor very impressed with the story but the novelty of seeing how the political system works in Japan kept me staying on. The strong supporting cast made the drama more bearable than becoming a mere Kimutaku personal show. Niracchi saikou!

More on the drama when I watch the finale in full. I was watching the live broadcast last night but that extremely long solo speech by Kimutaku just made me switch off. I have no idea what exactly happened in the end so I will comment on the drama later. 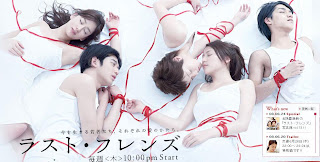 No.3 belongs to Last Friends which did relatively well in terms of critical reviews and ratings. It scored an average rating of 17.73% which was more than 3% ahead of the No.4 drama. And this is one drama which I finished from beginning to the end.

Nagasawa Masami fails to impress me AGAIN while Ueno Juri and Nishikido Ryo were exceptionally outstanding in this drama. Regardless of whether you are a fan of the cast, the story itself is compelling enough to keep you glued to the screen. I think the ending could have been handled better but then, nothing is perfect so I can't ask for too much. These days, a lot of dramas have sloppy endings so I've grown used to it. Anyway, the special episode had too much flashbacks so I was quite irritated to be taken for a ride instead of seeing what happens after the last episode.

And here's the rest of the ranking: 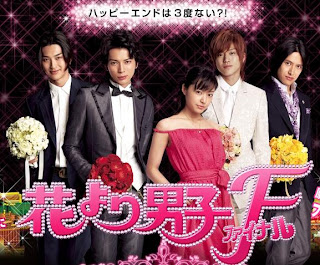 9) The Chronicles of Narnia: Prince Caspian