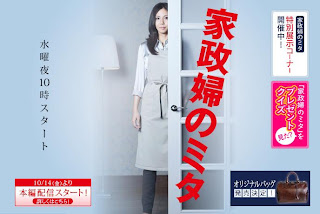 Email ThisBlogThis!Share to TwitterShare to FacebookShare to Pinterest
Labels: Autumn 2011, Kaseifu no Mita 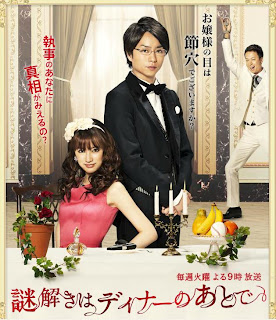 Numbers in brackets indicate the ranking in 2010.

Review of Mitsu no Aji Ep 1 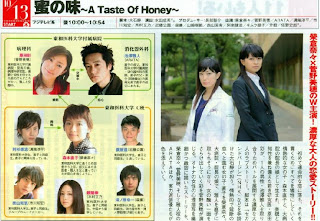 It's been at least a good 7 months since I last posted anything to the blog and a long time ago since I covered an in-season drama. Depending on my schedule, the updates may not be in sync with the OA timetable though. Nonetheless, if I'm interested enough to make an effort to start the episodic reviews, it also means that this drama is probably appealing enough for me to do so (at least at this stage). Besides time constraints, I think the only factor that might make me stop covering is that it's bad enough for me to give up halfway (which I really hope not).

First of all, let me go through the key characters:

Morimoto Naoko (Eikura Nana) - niece of Masato who's her uncle but not related by blood. Spurred by her feelings for him and that he couldn't return to his hometown Ushimado (Okayama Prefecture) for the annual summer vacation visits, Naoko resolves to go to Masato by attending the same university as his and aspiring to be a doctor. However, when she gets to Tokyo, she realises that Masato has been dating his classmate Harada Aya for some time and they are already making marriage plans.

Ikezawa Masato (ARATA) - a surgeon, brings up the topic of marriage to his girlfriend Aya but always gets rejected because she says she has no time. Unaware of Naoko's feelings and Aya's jealousy over Naoko's presence.

Norisugi Yasushi (Mizobata Junpei) - Naoko's classmate who made it to medical school after repeating a year and the son of a gynaecologist. 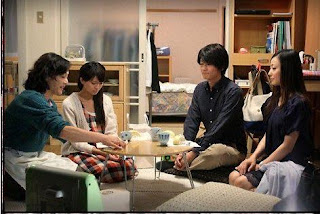 Basically, the first episode gives an introduction to the characters and their relationships with one another. The story actually starts in 2003 instead of present-day so I think the characters will look a bit different by the time they get to 2011. At least I would love to see Eikura Nana's long locks being snipped off. Short hair still suits her better. Anyway, back in 2003, that's when Naoko starts her first year in medical school which also marks her meeting with Aya and realisation that Masato belongs to someone else.

Actually, although the main storyline is fixed in 2003, there are some flashbacks to the time when Naoko was still a high school student and first came to know her feelings for Masato. The biggest telltale sign to me is actually the fact that she was being more self-conscious in front of him. That scene when they were sharing an umbrella in the downpour and that Naoko was concerned about her bra showing under her wet blouse already speaks volumes. You wouldn't care how you look in front of someone from the opposite sex unless he/she matters to you in the romantic sense. I like the subtle hint here because if everything was described in detail, it wouldn't pack a lot of impact at times. That said, I also feel that there is too much airtime given to describe how Naoko feels towards Masato, so much so that I was really tempted to hit the fast-forward button. Well, I get the drift that she likes him a LOT but I certainly don't need the excessive flashbacks about that downpour scene or how she resolves to go to Tokyo for his sake.

With regard to how I view the trio caught in the love triangle, I can say that they are all flawed in their own ways and I really can't decide whose side I would take at this point in time. Naoko irks me with her immature display of jealousy which I can't fault her because she's still young at this point in the story. I've yet to see how intense her love can be and what lengths she will go to but it does seem like she will be very much passive about this relationship because Naoko's character certainly doesn't look like someone who will try hard to fight for something. On the other hand, Aya does look cold and aloof especially when it comes to her relationship with Masato. It almost felt as if Masato needs her but she doesn't need him at all. I guess her upbringing and self-confidence makes her behave like this but it will be interesting to see her getting all tensed up and in battle mode because of Naoko's presence. I can certainly foresee that Aya will be up to many antics in the subsequent episodes but I'm wondering how dirty these tricks can get and how Naoko reacts to them. As for Masato, he's pretty much clueless about what's going on so the turning point will be when he knows. I have no idea how long that will take though but the sooner the better. Then he will probably compare and contrast these two women and bring out more interesting conflicts in the story. If I really have to choose who looks more interesting and worth paying more attention just based on this episode, I would choose Aya because she has a lot of potential for being a bad and scheming woman. 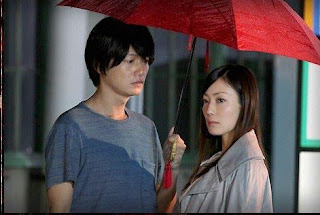 Frankly speaking, the first episode is usually more of an introductory one rather than giving a lot of conflicts to think. There are very few occasions when the first episode is very exciting. For this drama, the story moved really slowly at times but towards the end when Aya and Naoko were looking at each other across the street, that was a pretty intense moment. Naoko seemed bent on seeing Aya show her vulnerability in the face of someone needing medical help but Aya proved her wrong. Well, Aya is still a doctor after all so I think she can still step up to the challenge if she has to even though she detests the idea of dealing with patients. Naoko was a bit naive in that sense but when people are blinded by jealousy, logic doesn't work anymore. Aya is a sharp woman who already senses the animosity from Naoko from their first meeting. With that encounter in the last scene, that sort of confirmed Aya's suspicions that Naoko has a thing against her because she is in love with Masato.

The preview for Ep 2 shows that Aya and Masato are getting married. This is probably the best evidence that Aya is getting uptight about the situation and decides to change her pace of doing things just to get an advantage over Naoko. It will be fun to see how these two women fight but I just hope that the guy in question must wake up to what's going on soon in order for this drama not to slip into something like a longwinded tale about what jealousy can do to women.

Last but not least, regarding the music aspect of this drama, I think the BGM is quite good at times especially when showing the intensity of the conflict but the volume seems to be louder than in most dramas so it was a bit difficult to hear the dialogue at times. Maybe the volume should be turned down a bit so that the music fits its purpose as BGM and not overshadow the lines. As for the theme song by aiko, I don't really have a deep impression of it yet but it might grow on me in time to come. That credits roll seemed to be geared towards showing that this drama is an adult love story with the leads baring some skin but I don't suppose they can go to the extreme with a TV drama.
Posted by Chiaki at 12:12 AM No comments: 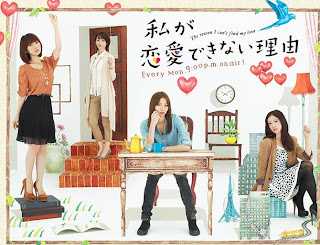 Preview of 蜜の味 Mitsu no Aji ~ A Taste of Honey 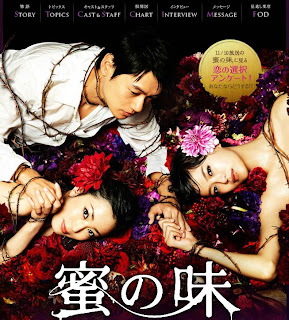 There are two main reasons why I am paying attention to this drama. First of all, the story sounds pretty interesting with Eikura and Kanno playing not just ordinary rivals in love. Eikura's character is a niece who falls for her uncle (although not related by blood) and follows him to Tokyo to be a doctor just to be by his side. On the other side is Kanno's character who plays a cool and collected female doctor who's already in a steady relationship with the uncle in question played by ARATA. I have to admit that the setting does seem a bit messy and borders on the edge of forbidden love but I think the part about the uncle and niece not being related by blood would have reduced the likelihood of viewers having an issue with the concept of hinted incest. However, I have a nagging feeling that the ending will be inconclusive after all.

Secondly, I like Kanno Miho's acting and I was impressed with ARATA's performance in CHASE so that got me keen on this drama. As for Eikura Nana, I think she did OK in Nakanai to Kimeta Hi but I do have reservations on how she will hold up against the other two leads. Nonetheless, I still hope that she will surprise me in a good way.
Posted by Chiaki at 10:54 PM No comments: