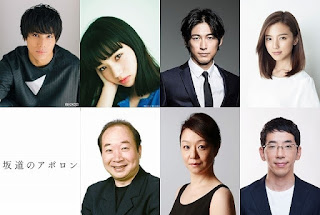 The supporting cast line-up of new movie "Sakamichi no Aporon" starring Chinen Yuri, Nakagawa Taishi and Komatsu Nana had been announced. The movie which will be shown in cinemas from 10 March 2018, is based on the same-titled manga by Kodama Yuki that won the 57th Shogakukan Manga Award and the No.1 title in the 2009 Kono Manga ga Sugoi's best-loved by females category.


The story features Chinen as the lead character Nishimi Kaoru who is a shy 1st-year senior high school student and has to move to Sasebo, Nagasaki to live with his relatives after his father passed away. He meets his classmates Kawabuchi Sentaro (Nakagawa) who is feared by others for appearing to be a scary delinquent and Mukae Ritsuko (Komatsu) who is Sentaro's childhood friend and comes into contact with jazz piano which he grows to love. On the other hand, Kaoru finds himself caught in a love triangle as Ritsuko likes Sentaro who is in turn in love with Fukahori Yurika, a 2nd-year student in the same school.