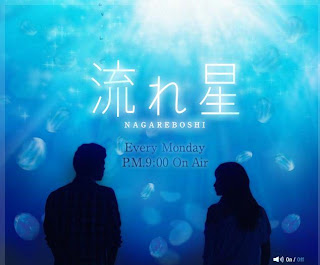 I must admit, the premise of the story didn't attract me at all when I first came to know about this drama. A contract marriage between two people who subsequently fall in love? That's really nothing new. Throw in the moral dilemma of paying for an organ transplant? That's a little bit more conflict. Plus Takenouchi Yutaka and a serious Ueto Aya? That's what really got me to give this drama a shot. Beware if you haven't watched this drama yet because there will be some spoilers in my review.

In short, this story is about Okada Kengo (Takenouchi) who enters into a contract marriage with Makihara Risa (Ueto) who works in the sex trade to pay off her good-for-nothing brother Shuichi's (Inagaki Goro) debts. Of course, the natural thing is, they fall in love but there will always be a crisis at the end i.e. the organ-for-sale issue. Plus Shuichi's constant sabotage tactics, these two wait till the very end before they can be together for good. Oh well, the ending wasn't that conclusive but at least, we saw Kengo and Risa share a kiss for the very first time at the very last minute of this drama.

Frankly speaking, this drama is full of flaws and expected developments. The pace is not exactly slow but with every step that's taken, you sort of know what's going to come next. However, the scriptwriter still tried to throw in some surprises although they had varying degrees of effectiveness. For example, when the organ-for-sale scandal broke, it was easy to see that Kengo and Risa would have to split somehow and get back later. What caught me by surprise was how Kengo took responsibility on his own and even got his family members to tell lies in order to protect Risa. I would have expected that he gets punished by the law for paying Risa to undergo the transplant but there was a small twist where his sister Maria was putting on a straight face and telling Shuichi about how "bad" Kengo was to have cheated Risa. However, Nagareboshi, being ultimately a love story (be it family or romantic love), chose not to go into the painful details of Kengo's punishment which I thought was another clever step so as not to drag the pace further.

What's intriguing about this drama is that, although it's very slow at times, there are some moments which truly struck a chord with me. For example, when Kengo was grieving at his father's grave, instead of going up to console him, Risa chose to stay away and leave Kengo alone. Sometimes, not doing anything can be even better than trying to do something in order to make oneself feel better. And the most interesting thing I observed was that, neither Kengo nor Risa said the words "suki dayo" (I like you) or "aishiteru" (I love you) throughout the entire drama which is a rarity in romance dramas. They knew exactly how the other felt and that's even sweeter than having to shout out "suki dayo" all the time. At least to me, I felt that the emotions they displayed were evident and words didn't seem necessary at all. That long-awaited kiss came a little too late and it was even blurred out but I guess it was still better than none. The hug-from-the-back tactic never fails to work on me especially when it's someone like Yutaka doing it! ^__^

With regard to acting, Takenouchi is back in his usual brooding, serious and occasionally funny roles as Kengo always has to worry about something. As such, his character may seem a bit boring to those who find the story's developments slow. However, if you compare this to the cheeky Nodate he played in BOSS, I think it's a good way to remind people that he can play these serious roles before he goes back to Nodate in April 2011. I'm kinda surprised that he and Ueto Aya looked OK on screen even though I was worried that she might look too young and short for him. Thankfully, the drama took into account their age differences and Ueto was wearing boots quite often so the gaps didn't look too obvious.

As for Ueto, I was hoping that she can impress me again like what she did years ago in Koukou Kyoushi. That angst and depth have been missing for quite some time. Although Risa is a slight deviation from the cutey roles she's been doing these few years, I think the role was rather restricted and made it difficult for Ueto show her acting chops. It felt as if she wanted to push the boundaries and yet stepped back when it looked too dangerous and she was at risk of spoiling her wholesome image. I guess it should be time for her to do something really daring (I don't mean nudity) and out of the box in order to show that she's not just a pretty face and can manage flawed characters.

Kitano Kii's role Maria is rather boring this time round and I really missed her strength displayed in "Life". A whining little girl just doesn't suit her. Moreover, asking her to act in that scene where she brings a guy to a love hotel just brings back memories of her scandal with another actor where they were caught leaving a love hotel. I think that's kinda redundant. Likewise for Matsuda Shota, his role as a doctor seems rather out-of-place especially when he tries hard to frown when talking about serious issues. And that recycling bag he was using just makes his whole image look terribly weird. The biggest villian of this show, Shuichi, played by Inagaki Goro is really so irritating that I think he's successful in this regard because viewers would "hate" him whenever his character shows up. I have to admit that I don't like Goro but he's a good fit with this role.

Something worth mentioning would be the location shoots in Shin Enoshima Aquarium (where Kengo works at), the seaside and Yamanashi Prefecture. It's been some time since I saw a drama with so much thought put into the background scenery and I think that's really worth applauding. In addition, the theme song by Kobukuro suits the drama's mood pretty well. I guess having a theme song written specially for the drama is indeed different from grabbing any song from the market just for commercial interests. The lines "kimi yori kirei na hito demo / kimi yori yasashii hito demo / kimi ni wa narenainda mou dare mo" (Even if there's someone more beautiful than you / Even if there's someone who's gentler than you / nobody can become you) are really great in depicting the nature of Kengo and Risa's relationship. They may not have started under the best circumstances but their love for each other is still real.

And my ratings for this drama...
Story: 6 out of 10 (Except for the occasional sparks and twists, the story was pretty slow and progressed in an expected manner most of the time)
Acting: 7 out of 10 (It's not easy to act in such a drama where emotions are mostly subdued but I like what I saw from Takenouchi Yutaka and Ueto Aya)
Theme song: 9 out of 10 (Kobukuro's song was very suitable for this drama)
Visual effects / Scenery: 8 out of 10 (It's been ages since I gave such high marks for this category so it goes to show how much I like the scenery)
Teamwork / Chemistry: 7 out of 10 (The chemistry got better between the leads as the drama progressed)