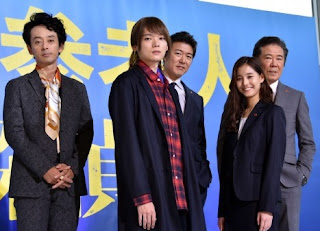 
The drama is based on the same-titled manga by Kinuta Murako which is currently being serialised in "Gekkan Flowers". Tamamori plays the lead character Maneki Kei who is a model. By a strange stroke of fate, he always becomes the first person to discover the body at a murder crime scene and is constantly seen as a suspect due to the uncanny coincidence. Koyama plays Suou Itsuki while Furukawa plays Simon Touma who are also models and join Kei in solving these murder cases in a comedic and straightforward way. Araki Yuuko plays the role of Saotome Karin who is a detective working in the 1st section of Metropolitan Police Department and the former girlfriend of Kei while Takito plays the character Namie Shinosuke who is the president of the model agency managing Kei, Itsuki and Touma.

For the filming, Tamamori revealed that he has been going through strength training and his favourite exercise is the pull-up which allows him to train his chest and back muscles. On the other hand, Koyama who has been a regular to the gym, gave Tamamori a friendly warning not to overdo things though. As for Furukawa, he said that he had lost 3kg in a month through eating chicken breast and tenders in preparation for a scene where he had to show off his abs. Takito who plays the president of the modelling agency which manages the trio, said that the three of them are so good-looking especially Koyama who has bigger arm muscles than he imagined.


During the event, Tamamori, Koyama and Furukawa were told to perform a live clothes-changing show in front of the audience with only their faces showing. Takito chose a scarf for each of them to be integrated into their clothes while the other co-stars were judges to decide who looked the best. In the end, Koyama won the contest for looking like a rich guy with his red turtleneck and a rose-patterned scarf.

Tamamori commented that he is trying hard to make sure that his reaction when seeing a corpse in the drama will differ each time so that the viewers will not get sick of it. As for Koyama, he said that as Tamamori has so many lines to memorise and is able to recite them without any problems, he felt that he has to work harder as the latter's senior and will try to enjoy the filming at the same time.