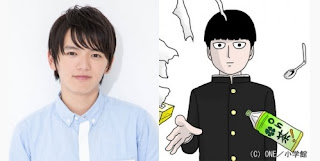 Hamada Tatsuomi will be starring in the new TV Tokyo Winter 2018 drama "Mobusaiko 100" (Mob Psycho 100) which will begin its run from January 2018 in the Thursdays 1am timeslot and also be shown via Netflix.


The drama which is based on the same-titled manga by ONE, features Hamada as the lead character Kageyama Shigeo who is a Year 2 student in a junior high school with a helmet hairstyle and hardly stands out among his peers. Being poor at sports and studies, he finds it difficult to interact with people and is ignored by his childhood friend Tsubomi-chan who he is secretly in love with. As such, Shigeo is nicknamed as Mobu by everyone around him for his tendency to be ignored and forgotten by others even thouh he is physically present. However, unknown to everyone, Shigeo actually has some very strong psychic powers which have been present since he was born but when he suppresses his feelings too much to the extent of 100 percent, he will unleash the full extent of his power without being able to control it. This power allows him to work part-time for just 300 yen per hour at the shop of self-proclaimed psychic Reigen Arataka and join the Nikutai Kaizou Club in school which he hopes will allow him to lead a normal life. However, with the appearance of strange people claiming to have supernatural powers, this leads to Shigeo being embroiled into various incidents which ultimately causes him to get involved in a big battle.

Hamada said that although his character Mobu is a dull person who hardly attracts the attention of others, he hopes to be able to show the pure and innocent side of his character and is excited about the upcoming filming and how the drama will turn out to be.