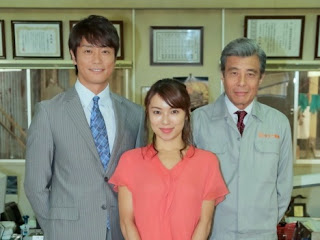 The press conference of new NHK drama "Machikouba no Onna" was held at NHK Nagoya on 27 Sep which was attended by staff members Uchiyama Rina, Tachi Hiroshi and Nagai Masaru. The drama which consists of 7 episodes, will begin its run from 17 Nov.

The story is based on the book "Machikouba no Musume" by Suwa Takako and set in a small town factory in Aichi Prefecture. Uchiyama plays the lead character Arimoto Hikari who is a 32-year-old housewife and lives with her husband (Nagai) and their son. When she was a child, her father Taizo (Tachi) tried to groom her to become his successor and manage the family business i.e. a small factory but Hikari resisted the idea. One day, when Taizo collapses due to exhaustion, Hikari is shocked to find out that her father has cancer and only has 4 days to live. In order to protect his factory, she decides to take on the role of company president. However, her husband who she is thinking of relying on to help her with the business, is sent to the US for an overseas posting. To make things worse, Hikari is seen as a president in name only and is belittled by the factory's executives, employees and their main bank. Co-stars include Yanagisawa Shingo, Murakami Jun, Oshinari Shugo, Kariya Shunsuke, Ichige Yoshie and Takenaka Naoto.

Uchiyama revealed that it has been a very enjoyable filming experience working with her co-stars and hopes to be able to continue this good momentum right to the end. As for Tachi whose hometown is in Nagoya, he commented that he always felt that he was doing something good for his parents whenever he appears in a NHK Nagoya work although it is a pity that his character will die in the first episode. Last but not least, Nagai said that as his character has the same name as him (reading is different even though the Kanji character is the same), he could ease into the role more easily. In addition, as this is his first role since becoming a father, he could tap on his personal experience to immerse himself into the story from the perspective of a parent.