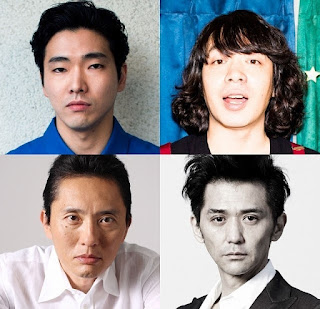 Mineta Kazunobu, Matsushige Yutaka and Murakami Jun will be appearing in the new movie "Suteki na Dynamite Scandal" starring Emoto Tasuku which will be shown in cinemas from March 2018. The movie is directed by Tominaga Masanori and based on the same-titled essay compilation by Suei Akira, who is a writer and had been the chief editor of publishing house Byakuya Shobou. It will describe the turbulent and eventful life of Suei to date such as how his birth mother (Ono Machiko) committed suicide when he was a child after an extramarital affair with the son from their neighbours' family, his resignation from the factory he worked at after senior high school and moving to Tokyo as well as how he set up the legendary erotic magazines "Weekend Super" and "Shashin Jidai" with photographer Araki Nobuyoshi in the 1980s.


Mineta will play Chikamatsu who is Suei's comrade and works as a sign illustrator while Matsushige plays the police detective Morohashi who keeps summoning Suei to the police station over the nude photos in his magazines and lectures Suei with his heavily-accented speech. Last but not least, Murakami will play Suei's father Shigeyoshi who is a man of few words.